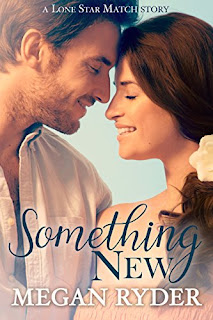 When Anna Maria Costado is caught having a meltdown on live television, her contract as a nighttime tv star is in danger of being cancelled. Taking a much needed break, she returns home to Texas for a friend's wedding and is faced with the man she left behind, the only man she ever loved, Wyatt Turner. After a knee injury sidelined his professional football career, Wyatt Turner returned to his alma mater as a football coach. Trying to rebuild a new life, Wyatt buries himself in coaching. Just when he thinks he has moved on from the past, a friend's wedding reunites him with the woman he once loved and lost, along with his dreams. Can Anna and Wyatt overcome the circumstances of their past and reclaim the future they were always destined to have?

I have to admit I wasn't sure if I was going to read this book at all in the first place. After finishing Brigid and Grady's book, I really didn't want to read Anna's book. But I wanted to see how the series would end and if I could warm up to Anna at all.

Let's start with Anna. I honestly haven't liked Anna at all in this series, not in the least. And I'm sorry to say that I didn't warm up to her in this book at all. If anything this book made me dislike her character even more. Anna has to be the most self centered, egotistical, narcissistic character I have EVER meet in a book and yes I realize all three words basically the same thing. So if you just want to pick one to call her be my guest. Anna never wanted to take the blame for anything, she wanted to blame everything on everyone else. Especially her old friend Delaney. When she basically did the same thing that Delaney did and ran. The only difference is Delaney admitted she had done wrong and apologized. Anna just went right on blaming everybody else for everything. And even though Anna tried to change at the end it was just too little too late for me and I couldn't even warm up to her.

Oh Wyatt... What can I say about Wyatt?..... I liked Wyatt, I really did. And I think he's the only thing that saved this book. He has definitely figured out how he is supposed to move on from his career dreams after his career ending injury. And has figured out how to make something else out of himself. I just didn't get why he let Anna kind of run all over him.

I also have to say I never really felt a connection between the two of them, even though they evidently had an epic romance between them beforehand. I thought that they actually had a better friendship than they did a relationship. The book was alright to me, as I mentioned I've never really liked Anna and didn't warm up to her at all in this book. But as always it was nice to see the other's in this book, though we didn't see much of them as we did in the other two books.

Disclaimer: I voluntarily read an advanced readers copy of this book for my honest opinion. The opinions in this post are 100% of Busy Bumble Bee Book Reviews and may differ from others.