A love three hundred years in the making — After being knocked out in battle, Angus Cameron wakes in a terrifying new world with flying beasts, horseless carriages, crazy music, and strangely dressed people. Has he gone mad? When Angel Adair discovers a man in 1975's San Francisco Lands End park dressed in little more than a Scottish kilt, is he just a confused drifter or her dream-lover come to life? 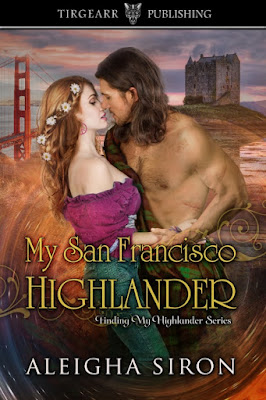 A loud crash and scream of alarm had him rushing to the front office. Two men dressed in heavy, dirty boots, black attire except for the silver studs and chains on their garb, and black leather caps on their heads, yelled at Angel. “Now, be quiet hot
stuff. If you give us the drugs, we’ll only play with you a little while before we leave.”
Rage burned through Brian’s limbs. The flash of sharp-edged knives drew his attention to the men’s hands. One of the ruffians held Angel with one arm wrenched behind her back and a knife at her throat. Something about them clicked his memory, throwing him back to the first day he’d arrived in San Francisco.
He stepped into the room. “Let the lass go. She cannae help ye.” Brian held his hands loosely at his sides, a sharp double-edged sgian dubh tucked behind closed fingers in his right hand.
“Well, lookey what we have here, a fairy in a skirt.” Brain wore his kilt several days a week and Granny had managed to procure a second one for him. It generated no shortage of bold approaches from both men and women when he donned his kilt, but he hated the chaffed, confining feel of modern day pants.
The second man wrapped a chain around his hand and clutched it in a menacing fist. “Give us the drugs, and we might let you watch as we play with this lovely flower. Perhaps we’ll even let you take a turn if you’re man enough.”
The first man snarled, “Get moving,” he pushed Angel still holding the blade at her throat. All the blood had drained from her face, but she didn’t shriek or faint. What a brave lass.
“I’ll give ye what ye want, just let the lady go.” Brian moved slightly toward the door and closer to the man advancing with Angel in his grasp.
“A lady. De ya hear that, Carl. That’s a laaady you’re hold’en.” His laugh held no note of fear. It was clear they thought they had the upper hand, but Brian had faced worse ruffians than these bullies. 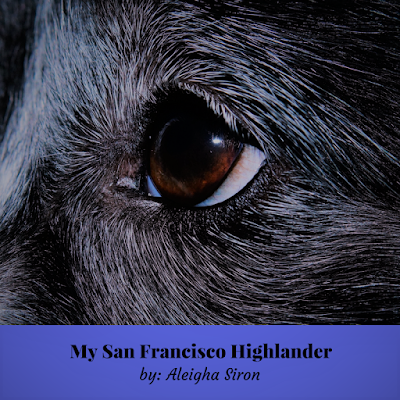 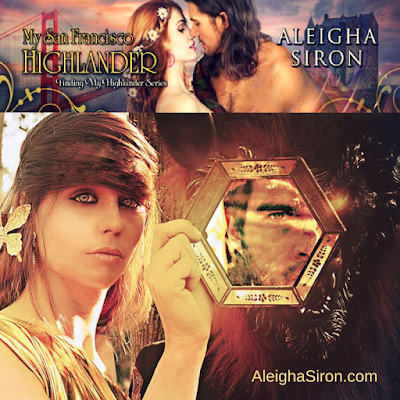 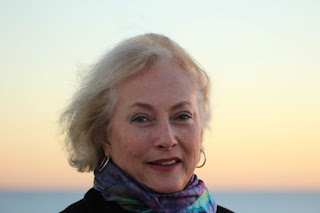 Aleigha Siron is an Amazon best selling author of Time-Travel romance. After more than twenty years writing and delivering management and other training programs for modest-sized to Fortune Five Hundred companies, and ten years developing community crisis-intervention training programs, Aleigha turned her writing efforts to her first loves, fiction, and poetry. Her poetry has appeared in numerous anthologies and university presses over the past few decades (under her alter ego’s name.) Following a difficult period in her life, she discovered solace in romance novels that inspired her to write in this genre. As she says, "who doesn't desire a guaranteed happy-ever-after scenario?" Always interested in the concept of time-travel, she knew her first few stories would follow that theme.
When not writing, her trusty four-legged companion/helper, Strider, accompanies her on sunset walks along the shore. During these quiet walks under an expansive sky, with the whoosh of waves across the sand and her gaze drifting over the rolling sea, her best glimmers of inspiration come to mind. Following the recent discovery of distant Scottish ancestors, she embarked on a trip to the Highlands that is still weaving stories in the Finding My Highlander Series.