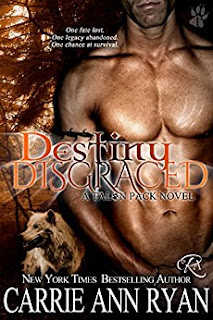 The Talon Pack continues with a new twist to the Packs and a revelation no one was prepared for.
Mitchell Brentwood is aware that others think he’s the harsh taskmaster Beta trying to keep his Pack alive, but they only see what he wants them to know. He’d once thought he had his path laid out before him, but when his future was violently ripped away, he vowed he’d never let anyone close again—especially not a young wolf from a traitorous Pack.
Dawn Levin may be younger than the war that destroyed her people, but she knows she must still pay for their sins. She’s ready to find her way in this new world where wolves and humans blend as one, but first, she needs to fight her attraction to the dark wolf that stands in her way.
While the two struggle with their feelings and burning attraction for each other, they can’t ignore the world that shakes beneath their feet. There is a new enemy on the horizon, one with revenge and the unknown on their minds. An adversary that might be closer than they realize.

While I may not be a newbie to Mrs. Ryan's books and writing. I am more of a newbie to her Paranormal series. I've been a fan ever since the first Montgomery Ink book. Though I have read two of Mrs. Ryan's paranormal books but those were in the Redwood pack. So this is the first one I have read in the Talon Pack. Even though this was my first book in the Talon pack I do believe that these books can be read as stand alone's. But you may want to read the others so you can understand what's going on and who's, who.

I felt for Mitchell, I really did. Mitchell is the Beta for the Talon Pack and has self proclaimed himself the ba$tard beta. He's been carrying a secret around on his shoulder's for thirty years that even his family doesn't know about. He lost his human mate thirty years ago and still hasn't truly gotten over the loss. Now he finds himself in a predicament that might mean he needs to learn to let go and move on. But finds himself having a hard time of letting go of the past.

I really liked Dawn's character. I thought she was sweet, kind, and caring. Dawn has her own issues with her past and what her families former pack had done in the past. Now her family and those left from her old pack are trying to become a pack once again. Dawn finds herself kind of feeling like she doesn't belong anywhere. That is until she starts spending more time with Mitchell.

I thought that this was a very enjoyable book and I was hooked right off the bat. I liked watching the relationship between Mitchell and Dawn grow. Though at times I found that it moved a bit slow. But other than that it was very enjoyable.

Posted by Busy Bumble Bee Book Reviews at 11:54 AM