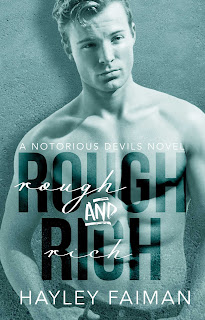 Imogen Caroline Stewart-Huntington hasn’t always been a rich bitch, her sunshine blotted out by her husband’s need to soar.

Sloane McKinley Huntington III hasn’t always been a Devil, but the brotherhood was his ride to the next best high—a vice he couldn’t shake, until he didn’t have a choice.

Now, three years sober, he sees with clear eyes. Free from the shackles of prison, all he wants is a second chance, his sights set on one woman—his wife.

Imogen knows that money can’t buy love—but when the rough man who stole her heart barges back into her life, she can’t help but question if perhaps forgiveness will.

So I have to say I have been waiting for this book. I have thought that Soar had been the most interesting character ever since we meet him. So I was really excited when I heard Soar was getting a book. I couldn't wait to find out his and Genny's story.

I also have to say I wasn't sure if I would like their story or not. I mean honestly Soar had some questionable values. Ok, lets be honest here, Soar was a cheater. And even though we didn't know Genny very well, and what we did know she seemed kind of like a bit(h.

Lets start with Sloane, aka Soar. Ok, so even though Soar does have/or did have questionable values. But besides his actions and what he did in his past, I have to say Soar may be one of my favorite characters. Though throughout the book there were times where I really liked and him. Than there were others where I wanted to throat punch him.

I have to say I had questions about Imogen, aka Genny. I really wanted to give her a chance when I started this book. There were times in this book like with her husband that I rolled my eyes at her and how she was acting. And there were other times where I really liked her. I really liked being about to get to know her much better and found out where she came from.

Disclaimer: I received an ARC of this book from Enticing Journey Book Promotions for my honest review. The opinions in this post 100% of Busy Bumble Bee Book Reviews and may differ from others.

Posted by Busy Bumble Bee Book Reviews at 8:50 AM