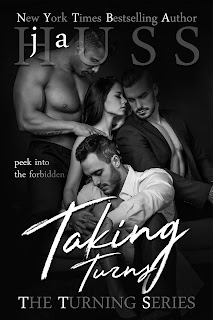 Chella plays the game of Taking Turns with three men as she comes to terms with her sexuality.

I’ve never been afraid of the dark...but that doesn’t mean I wanted to live in it. And maybe everyone wants what they can’t have, but I should’ve thought it over before I accepted the key and unlocked the door to their forbidden world.

Number One is mostly silent. He watches me with them very carefully. His gaze never wanders. His interest never wanes.

Number Two is mostly gentle. But it’s the other side of him I like best. The wild side.

Number Three is mostly reserved. He refuses to cross the line. Even when I beg.

So I had been super excited about the chance to review this book. I couldn't wait to read it and my expectations were high for this one. I mean what could be better than 3 guys in one book, right?

I have to say I kind of felt at parts it just moved way to slowly. I felt a little bit confused about what was going on really. They kept talking about games and rules and everything and it never really gets explained, until chapter ten.

The book starts when the guys find out the their former game mate Rochelle has left the game when Quin mistakenly has $ex with Chella who had taken Rochelle's place. And I found it quite hard to separate Rochelle and Chella since their names were so similar. Even though Chella's name is really Marcella.

Look I'm not saying I didn't enjoy the book, because I did. I did really like Quin, Bric, and Smith.....

Not sure if I'll continue on with this series or  not!!!!


Disclaimer: I received an ARC of this book for my honest opinion. The opinions in this post are 100% of Busy