Below the Line {Book Review} 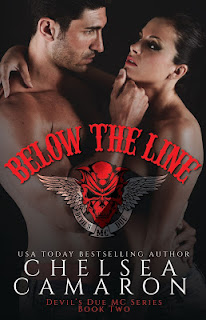 The bastard boy was left alone when his mother was murdered and her killer never found. The domino effect of one person’s crime going unpunished is everlasting.

Owen ‘X’ Gallow has never known a real home. Groomed by the streets, he now has a life with the Devil’s Due MC that gives him the only comfort he has ever known. Family comes by blood and by choice. All Owen has left is his by selection.

He keeps his circle close and doesn’t care to have a future.


She’s not afraid to call herself a sinner.


Hadley Combs doesn’t ask questions, and she has never had anyone to cover her back. She was born alone and will die alone, or at least, that’s how she views her life. In order to get by, she has a job to do—get them off and get herself paid, no talking necessary. The life of a hooker isn’t easy, but she gets by.


However, danger climbs in her bed.


Will Owen find a way to let Hadley in? When faced with the dangers of her lifestyle, will Hadley let Owen and his brothers keep her safe?


Love, hate, anger, and passion collide as the time comes, and the devil demands his due.

First I have have to say I have been waiting for what feels like forever for this book to come out. I got so excited when it showed up on my kindle and I got the chance to read it... But unfortunately that's about where my excitement ends.

I have to say I enjoyed Owen or X, as his brothers of the Devil's Due call him. He's a young man who watched his mother get murdered in front of him. Than loses the best thing that he had when he's living on the streets. Years later he find out that Hadley is still alive and he is determined to find her and make her his.

I'm not sure what to really say about Hadley. She just didn't really work for me in this book.

This book definitely brought the drama and the twists. Truths about Owens past came out.