Smoke Montoya… Ex-Navy SEAL. Wanderer.
A man can’t change his past. Yet there Smoke was, forced to deal with the deaths of his parents in the wake of a deadly Texas twister. He no longer belongs at their ranch, the Lost Chaparral; he’s not sure he ever did. Face to face with regret for words unspoken, he plans to sell the place and move out. It’s a solid exit strategy: Get in and get out before the Devil knows he's there. It would’ve worked until that frisky herd of Texas Longhorns showed up.
Jessie West… Super model. New York’s latest flavor of the month.
She’s only come back to Texas to bury her brother Ethan and to sell the family farm before the press catches wind she’s not at the swimsuit shoot in Cannes, France. The only obstacle to her devious plan is the cowboy who lives down the road. The one who started a fire in her belly when she was just a kid in pigtails. The one who’s as elusive as… Smoke.

This was a first for me reading anything by Mrs. Winters. Though I will admit that this book was a bit difficult to get into at first. I thought it moved a little bit more slow than to my liking. And a little bit confusing, until some things get explained.

I loved Smoke in this book. I just loved his name alone.... But I loved him more when we got to know him better. I really felt for the loss of both his parents, even though he hadn't spoken to either of them in year's.

Ummm Jessie definitely takes some  warming up to and I don't think I've read any characters like her.

This book I will admit got so much better by the middle and end that I didn't want it to end. There were definitely some twists to this book.

Disclaimer:  I received an ARC of this book from Enticing Journey Book Promotions for my honest review. The opinions in this post are 100% of Busy Bumble Bee Book Reviews and may differ from others. 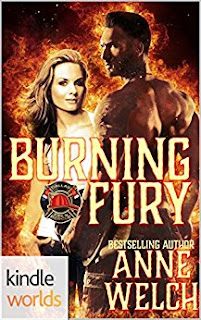 Grace Scott was a firefighter in Nashville, until the night a fire ended her career. Her fellow fighters, Zach and Ray, tried to help her, but Ray didn't make it out and Grace was so severely injured that she could no longer be on active duty. So, she did the next best thing—she became an arson investigator.
Zach Raines felt guilty. He felt responsible for Ray's death and Grace's injuries, to the point he could no longer remain in Nashville. He took a job at Station 58 in Dallas, for four long years. With some help from the people he met there, he was finally able to return. It was time to let Grace know how he really felt about her. But would she—could she—forgive him for running out on her at a time when she needed him the most?
Caught in the web of a serial arsonist, Zach and Grace find themselves thrown together as they piece together the clues. Will they bury the past at last and find a future together as they solve the case that will leave all of Nashville reeling?

This is the first time I have read anything by Mrs. Welch, but it won't be my last. I really enjoyed this book from start to finish and I couldn't put it down.

I really liked both Zack and Gracie's characters and thought they were perfect together. And I thought that some of that guilt Zack carried around on his shoulders was unwarranted, but I understood his reasoning for it.

This book was as fast paced as it was hot. I thought the characters were relatable and very likable. And the suspense definitely kept me interested and wondering who was guilty and kept me turning the page.

Disclaimer:  I received an ARC of this book from Enticing Journey Book Promotions for my honest review. The opinions in this post are 100% of Busy Bumble Bee Book Reviews and may differ from others.