Too Bad So Sad {Book Review} 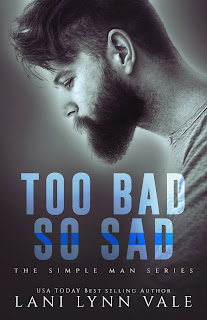 Tyler Cree has never been good at the whole look and don’t touch thing.
From the moment he was old enough to walk on his own two feet, he’s been looking for trouble.

Trouble comes in many forms…quite a few of those forms being the female persuasion.

Tyler knows what girls want—a bad boy. And he has the bad boy image down pat.

Ex-military—check.
Hot cop—double check.
A bike between his legs and a devil may care attitude—oh, yeah.

All the girls want him, yet none of them will have him—at least not all of him, anyway. A certain appendage they can have all they want. His heart, however, is not up for grabs. The useless organ inside his chest was broken and battered, mutilated by the one woman he thought would keep it safe.

Spoiler alert: she ripped it to shreds and set fire to the pieces.

To protect himself, Tyler keeps everyone at arm’s length, and never lets anyone get too close.

Then Reagan Rose Alvarez barrels into his life, and trespasses on not only his property, but straight into his abused heart. One glance is all it takes, and he’s suddenly thinking about things he hasn’t thought for quite some time—thoughts that a man like him should never have about a woman like her.

One moment of weakness is all it takes, and suddenly he has no other choice but to go on the offensive.

Keeping her is the only other option now.

Turns out, his heart isn’t as broken as he thought it was.

The only problem is, now the little she-devil holds it in the palm of her hands, and she has no clue just how much power she holds.

Hmmmm where do I start this review? I will say this besides Coke and Cora, I think this may be my favorite of the series. I think these last two books were the best of the whole series by far. We get to follow Cheif Tyler Cree and Reagan in this book.

Lets start with Reagan. I would say that we first meet Reagan in this series, but that's not entirely true. Reagan is Bennett's daughter that he had when he was just a teenager. I guess I hadn't put two and two together until this book and she mentions who her father is. But anyways I liked Reagan, I thought she was a likable character. She's sweet, nice, kind, caring, and a bit shy.

Ahhh Tyler.... We finally get to know the Cheif better. Tyler's the man that came in to position of Cheif after the whole department he's taken over is found to be mostly dirty. We've gotten to see him breifly in the other books, but haven't gotten to really known him. But I really enjoyed getting to know him in this book. He's a man that's kind of set in his way's after having his heart torn out.

I have to say that the last few books I know I've complained about the family connection or the absence of the family connections in this series. But I'll have to say that it wasn't really missing in this book. That was one of the first things I noticed. I will also say that this book has the most ties to Mrs. Vale's other series. When you read it you'll understand what I mean. We also get to meet some new character's coming up in a new series. But I did enjoy this book.

Posted by Busy Bumble Bee Book Reviews at 9:50 AM