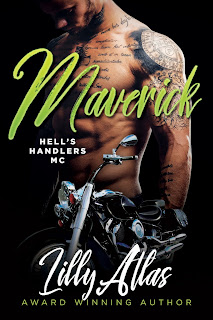 Stephanie Little firmly believes the world exists in two states: right and wrong, good and evil, unlawful and law-abiding. She chose her side the moment she joined the FBI and pledged to rid the world of as many criminals as possible.
Maverick is everything Stephanie isn’t: inked, pierced, flirty, masculine as sin, but most of all, an outlaw. When corruption in Stephanie’s crime-fighting world lands her in the clutches of a dangerous gangster, Maverick is there to keep her sane and battle for her protection.

With Stephanie’s neat existence so turned around that she can no longer distinguish the good from the evil, she finds herself thrust into a world so gray she can’t see three feet in front of her face. To survive the confusion, she turns to the only person who keeps her grounded—the sexy outlaw who melts her heart and weakens her knees.

But law enforcement and criminals can never mix. Not in the way her body and heart are begging for. At some point, someone is going to learn her secret, and when that happens, her fierce protector could become her greatest enemy.

So Maverick is the second book in the Hell's Handlers. And I would say that the first seven chapter's of this book are at the same time as Zach and Toni's book. If you don't know who Zach and Toni are, well their book is the first book in this series. So I would suggest if you haven't read that book yet that you may want to go back and read that book, so you can get a feel of what's going on at the beginning of this book. Otherwise this book could be read as a stand alone.

Ahhhh Maverick.... We first meet Maverick back in the first book where he was bit flirtatious with Toni, but that was just to get Zach's motor running. And than he had to go and get himself......Well I'm not giving that part up, you'll just have to go and read the first book if you haven't yet and find out what I'm talking about. But anyway's the little bit that we did get to see of Maverick in the first book I did really like.... But what I really liked was getting to know the real Maverick in this book. And I liked him even more in this book. Maverick didn't have the best upbrining and he's got a bit of a dark edge. But underneath all of that he's got a softer, kind, caring, protective, and loyal side to him.

Ahhhhh Stephanie..... She's a girl or a woman who grew up with a cop father. Believing everything was easily right or wrong, that everything was black or white. That there really couldn't be an inbetween. She's a woman who her herself works for the FBI and finds herself suddenly in trouble when she goes to check on her partner and getting in a bad situation. I liked Stephanie, I thought she was a likable character.

Overall I thought that this book was enjoyable and was a nice addition to the Hell's Handlers series. I did kind of find myself skimming through the first half of it. But other than that I did reallly enjoy it.

Posted by Busy Bumble Bee Book Reviews at 9:53 AM