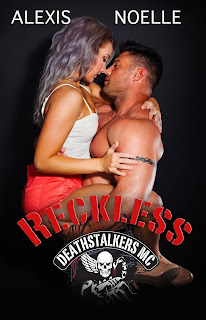 Forbidden.
Off Limits.
Unattainable.
Those are the rules.
I can’t claim her--a club girl.
A club whore if we're cutting the shit.
But Carly is different,
Something about her makes me want to break all the rules,
Break the code,
Keep her for myself,
And make damn sure my brothers don't touch one inch of her.
That's a dangerous promise,
But for her, I'm ready to get a little reckless.

But as I sit here and think of what to say, I just want ask, "What happened to this series?" I mean seriously, What Happened to this Series?.... This used to be one of my go-to, re-read, favorite series. I used to get so excited for when the next book was going to come out. I had asked myself a rhetorical question back after either book 3 or book 4, "Had Mrs. Noelle peaked the story line for this series way too soon?"

Anyway's on to my review of this book....

Ahhhh Carly.... Carly is a young women who's just gotten out of a bad marriage with her high school sweetheart. And her best friend and roommate Jess, has now decided for Carly to move on from that toxic relationship that she should become a club girl. It was clear that she was commited to doing it until she ran into someone from her past that threw a wrench *get it?* into her plans. I thought Carly was sweet, kind, caring, maybe a bit nieve about somethings. But she seemed like one of those people who could be friends with anyone.

Ahhh Jaxson, aka Wrench, is the Deathstalkers tech guy. He's the guy that gets all the information for the guys. He's also a man who has been in love with Carly since they were children. But with her being a club girl, he can't claim her like he wants to. I liked Wrench, I really did I thought he was a sweet guy.

So I don't want anyone to think that I didn't enjoy this book, despite what I put at the top of my review. Because I did enjoy this book!!!!! I've just found that the last few books the tone of this series has seemed to change. I can't put my finger on it but something has changed, the brother's don't seem like they were in other books (one in particular). But I will say that I enjoyed this book much more than the last two.

I'm giving this book 3.5 Stars out of 5, because I have been with this series since book one. And have loved this series. I'm going to stick it out to the end!!!!