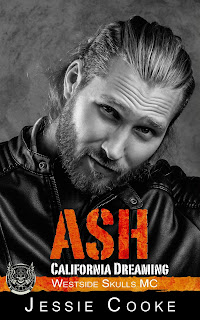 Ash, an enforcer for the Westside Skulls, returns home to New York for his father's funeral. He hadn't seen him in five years thanks to a combination of events that sent him out to California and a whole new life. Ash...or Asher Bennett IV, as he was known in New York, hailed from an uber-rich family and for a few years after graduating for college, worked on Wall Street...before ending up in California, in a leather kutte on the back of a Harley. Ash just wanted his father's funeral to be over so he could escape his gold-digging stepmother, his snobby teenaged sister and the plastic, fake people of his childhood once more.

The past hurts, and it only gets more painful at the graveside when he comes face to face with his past…Mackenzie, or Mack as he always called her.

Mack was the girl he'd loved since he was thirteen years old, and the woman who had stood him up at the altar five years ago.

Ash's father's death leaves him juggling his life as a Skull, his past with Mack, and the possibility of a future with his teenaged sister who wants nothing more than to escape...the same way he did, and a stepmother who will do anything she can to make his life hell.

Of course, when it rains, it pours and in the course of dealing with club business...tragedy strikes, and Ash has to either learn to reign in his notorious temper...or risk losing everything.

Climb on the Harley with Ash and Mack and take a wild ride that will leave you wondering what's around the next bend in the road...and gasping for breath when you get there.
* * *
Book 4 in the Westside Skulls MC Series.
This is a Standalone Romance Novel but characters from the previous stories in this series appear in this and future books in the series.
HEA and No cliffhanger.
Intended for Mature Readers.
* * *
The Westside Skulls MC Series is about members of the MC club, their friends and associates.
Each story, while focused around one main character, is not necessarily about a Westside Skulls club member, but the story is related to Skulls members and the club.

So this is the fourth book in the Westside Skulls series. Techincally it could be the third, because Wolf got two books. But yeah I guess this could be considered the fourth book in this series. And uhhhhhh..... yeah, I'm trying to decide how to write this review. Honestly I was so excited for Ash's book after reading Bruf's book. I really wanted to know Ash's story and what had happened. Let me do Asher Bennet IV, aka Ash, first..... Ash is a young man who comes from a privileged background. He's a man who doesn't neccessiarly need to be in the MC life and probably wouldn't expect to find in the life. But after being left at the alter by his fiance, he was unsure what to do with his life. So he joined his best friend Sledge and joined the MC. I really liked Ash and found him to be sweet, kind, caring, and protective. But on the other side of that he was a bit of a hot head and seemed to get angry easily. Uhhhh Mackenzie, aka Mack...... I wanted to like Mack, I really did. I even really tried to give her a chance going into this story. I tried to keep an open mind about why she left Ash at the alter. And I mean I feel for the girl and what she went through and everything, and even understood her reasoning..... BUT honestly I found her to be weak, she's probably one of the weaker heroine character's that I have read in a long long while. I mean her excuse for leaving Ash at the alter was just weak. I know that she was young and probably impressionable. But she obviously had no trust in Ash, or their relationship if she's was going to believe something she thought she saw on a video. I just never really liked Mack in this book and didn't feel like she belonged with Ash. As I said above I had been really excited about Ash's book when I had read the excerpt in Bruf's book. But I kind of felt let down and disappointed with it. As I just mentioned I never got into Mackenzie's character. And because I just never really could get behind the Ash and Mack relationship, I found myself skimming through the smexy parts. BUT I will say other than that this was a good book and I did really enjoy Ash himself. Mrs. Cooke didn't skip out on the drama with the club either. I'm giving this book 3.5 Stars out of 5 and can't wait for Sledge's book!!!!