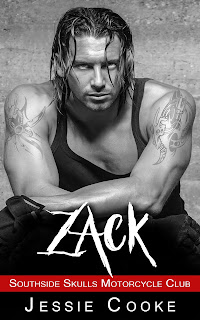 Zack "Attack" Leoni is a wild and free nomad biker who spends most of his time on the road. Each stop there's another woman to satisfy his needs.

He's not one to be tied down to anyone or anything and certainly not a woman with a child.

Nicole Swafford fears for her life as she tries to escape Spider, her violent ex-husband and the father of her child...the same man Zack is meeting for a club business deal.

Will the smiling Zack Attack jeopardize club business for a woman he doesn't know, with a child he doesn't want?

Will Spider let anyone stand in the way of what he wants? His child and Nicole.
Two men, one woman, and a child. That's trouble. Big trouble.

This is book four in the Southside Skulls MC Series.
It is a Standalone Romance Novel but characters from the previous novels, DAX, CODY & GUNNER are main players in this story too. HEA and No cliffhangers.
Intended for Mature Readers.

So I have to say after being a little bit let down by Cody's and Gunner's book I was a bit weary about reading this book. In fact I wasn't even sure I wanted to read this book. But I thought what the heck I'll give it another go. And I'm so glad I did. I thought this book was so much better than the others.

I really liked Zack. Even though he is a man-who*e, player. And even though Zack is the way he is, I've thought since meeting him in Gunner's book, that he is probably one of the smarter ones. Or maybe not smarter, but seems to have a good head on his shoulders. I liked that he was willing to protect Nicole and her son Liam, no matter the cost.

I really liked Nicole in this book. I thought she was a young woman who had gotten herself stuck in a situation and was trying to figure a way out of it. I thought she was sweet, kind, and caring. And I could understand her hesitation with Zack.

As I said above I did find this book much more enjoyable than the last two in this series. There's a lot, and I do mean a lot that is going on in this book that kept my attention. It was nice seeing some of the regulars making an appearance in this book.


Disclaimer: I received an ARC of this book from Enticing Journey Book Promotions for my honest review. The opinion in this post are 100% of Busy Bumble Bee Book Reviews and may differ from others.