For The Love of Beard {Book Review} 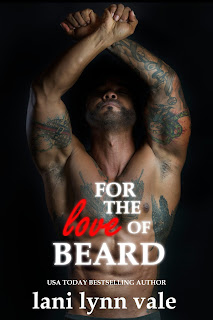 Tobias knows that women are a lot of trouble, and one in particular is more trouble than most. Yet even with the knowledge that she’s a pain in the ass, he doesn’t stop himself from doing the one thing he knows that he shouldn’t do—fall in love with her.

It’s supposed to be simple. Get in, get the girl, and get out.

What Tobias isn’t supposed to do is fall for the woman he’s supposed to rescue. But he can’t help being intrigued–and amused–by the defiance rolling off Audrey every time he so much as speaks to her. This fascination only intensifies with every single word from her delectable mouth.

It’s been six years since her assault, yet it feels like it happened just yesterday. Audrey’s sick and tired of feeling so useless. She’s had enough of being scared, she’s doesn’t want to be all alone for the rest of her life. All of that boils down to a woman who’s had enough of not doing anything to reclaim her life.

She’s at a loss as to how to move on, and every attempt she makes results in failure. Just when she’s ready to quit, a sexy biker is there to push her out of her comfort zone.

Under Tobias’ patient guidance, Audrey slowly makes her way back to herself. She lands a job that she adores, and she thinks she’s finally found her place in this world. Most surprisingly, though, she finds herself falling in love with a man that honestly scares her to death.

Just when she vows to take that final step that’ll put her past in her past forever, the life she wants to live is yanked away. Leaving her with nothing to pick up the pieces.

Hmmmm what can I say about this book?.... Well after the let down of Ghost's book, I found this book to be so much more enjoyable. Which was a huge sigh of relief for me. I mean with this being basically the end of this series, I would hate for it to end on me not liking it or something. I do have to say though I'm sad that this is the end of this series and I'll definitely miss these Dixie Warden guy's and gals.

I loved Tobias, aka Fender. I thought he was sweet, caring, kind, protective, and he definitely cared about his family. You could tell he was close with his blood brothers. I also thought he was quite funny when he wanted to be.

I really liked Audrey's character. If you don't know who Audrey is, than she is Ghost's sister. Who had been attacked by one of her parents, people who worked for them. She's just trying to make it day by day. She's definitely a fighter, and probably stronger than she thinks she is. She's also very sweet.

As I said above I did really enjoy this book. And I'm sad to see the end of this series. I will say that although we saw a few of the other guy's in this book. I kind of missed the other guy's and the brotherhood they share with each other. This one was much more of a stand alone and could be read by itself and I don't think you would be too confused. Though there might have been a few references  to things in the past book that might confuse you if you haven't read it. And I have to say that I loved the end of the book the best because it just made me laugh out loud.