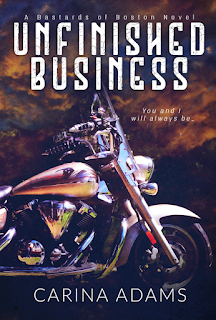 The Bastards of Boston live in a world most don't understand. They follow their own rules, only accountable to each other, the innocents they protect, and the people they couldn't save.

As president of the Bastards MC, Robert Doyle is the man behind it all. It’s his responsibility to keep his club safe, to be the smartest man in the room, and be ten steps ahead of everyone. He’d give everything he had, and sell his soul to the devil, to protect the ones he loves.

Until Rocker comes face-to-face with the pain he thought he’d buried. Old wounds are ripped open. Revenge consumes him. Once again he’s the teenager desperate to avenge his daughter’s murder and nothing else matters.

He calls me his angel, but the halo I wear caught fire a long time ago. There is no line I won’t cross, no law I won’t break. I’ll do whatever it takes to save him. If the road to hell is paved with good intentions, I’ll happily burn.

When past and present collide, we’re in for one hell of a bumpy ride.

This is my first time reading anything by Mrs. Adams and anything from the Bastards of Bostons. This book follows Rob and Cris. I will say that this book starts in the present and than most of it is spent in the past, giving us a nice background to the characters. Than returns to the present to end the story.

Robby/Rob, aka Rocker....... I really liked him and felt for him. He hasn't had the easy-ists past and has had the burden of losing his daughter resting on his shoulders for most of his life. I really liked being able to get underneath the harsh tough exterior and find out what he's really like.

Oh Cris..... I went back and forth on her. I have to say I did feel for her and everything she had been through. I think that with everything she had been through made her have a slightly skewed view on the world and made her angry, very very angry. I understand where her anger came from, but at other times I felt like it was blown way out of proportion.

I want to say that overall this book was very enjoyable. I thought that this book was real and raw. It wasn't your basic everything is roses story. This book showed real issues and how hard it is to overcome them. This book was about healing and forgiveness in ones shelf. And maybe finding forgiveness in others. I did have a few issues with this book, I felt at times that the anger Rob and Cris had towards each other was blown out of proportion. And at times I felt it took from the story line. I also felt like at times that other issues in the story line were glossed over and than thrown back in at the end and just very quickly resolved. Other than that as I said above I really enjoyed this book.