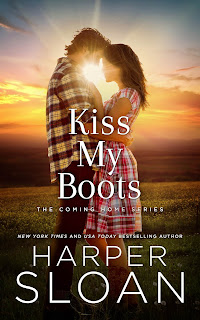 In this second of the sultry, Western-set Coming Home series from New York Times bestselling author Harper Sloan, Quinn Davis might finally have a shot at her own happily-ever-after—but will she let love in, or will she tell it to go ahead and kiss her boots?Quinn Davis prefers to live her life quietly. She’s the stereotypical tomboy with two overprotective big brothers who have always been there to protect her, especially from devilishly handsome cowboys with silver tongues. That is, until Tate Montgomery comes riding into town. Their first meeting, however, is far from something out of a fairy tale and only further convinces Quinn that men aren’t worth her time.The only place Tate Montgomery ever truly felt at home growing up was during the long, sweltering summer months he spent at his Gram and Paw’s farm in Pine Oak, Texas. Now, Tate has returned to his childhood sanctuary seeking a fresh start—but if he’s being entirely honest, he’s not just back for the wranglers and Stetsons. During those summers, Quinn was a friend-turned-young-love who Tate lost when life threw him a curveball and he cut all ties to his past; but all it takes is one glance at the raven-haired beauty he did his best to forget for him to realize just how much he’s been missing….

Ok so I'm going to be completely honest here because that's what your supposed to do on reviews, right? So here it goes..... After reading the first book Lost Rider in this series, I wasn't sure if I was going to continue with it. I had been so excited by this new series from Mrs. Harper and couldn't wait for it to come out and read the first book. But I quickly found myself not being able to finish the first book and became quickly disappointed in their juvenal behavior. So as I mentioned I wasn't sure if I would continue with this series or not. But I wanted to give this series and Mrs. Harper another chance to how should I put it, redeem themselves.......And I have to say I'm happy that I gave this series another chance. Now this book is what I'm talking about. This book is what I had expected the first book to be like. But I liked this book so much more and was actually able to finish it.Let's start with Quinn..... Quinn was a take Charge, No bars held, kick arse, independent, tough, strong, sassy women. But underneath all of that toughness there was a vulnerability to her. She's the baby of the family and sister to Clay and Maverick. But I honestly think she is the heart of the family and the one who holds everyone together. She's also not sure about her one time love of her life Tate returning back to her little hometown and how to deal with it. Oh boy Tate..... Tate and Quinn are no strangers to each other. They had that young first time love with each other when Tate would visit his grandparents when they were kids. Nine year's beforehand Tate made the decision to basically disappear on Quinn, with no reason or contact. Now nine years later he's returning back to Quinn's hometown to try and win her back and finally give her an explanation as to why he disappeared. I liked Tate, I really did. He was one of those sweet, kind, and caring people. As I said at the beginning of this review this book was so much better than the first one. I definitely enjoyed it more. It was a sweet and sassy second chance romance, with just the right amount of smexiness added into it. I'm giving this book 4 Stars out of 5 and actually can't wait for Clay's book!!!!

Disclaimer: I received an ARC of this book from Netgalley for my honest review. The opinions in this post are 100% of Busy Bumble Bee Book Reviews and may differ from others.

Posted by Busy Bumble Bee Book Reviews at 10:41 AM