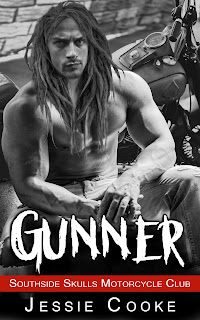 Tall, dark, sexy, blue-eyed Gunner Davis wears a leather kutte that he believes to be his father's.

His mother was holding onto it the morning he found her dead.

All the dreadlocked biker ever wanted was to be part of a family.

When the faces of danger come looking for him, so does a link to a family lost.

Tamara's father Randall, is the VP of the Head Hunters MC Club. He is over-protective, and the last person he wants anywhere near his daughter, is a carefree and careless associate of a rival club.

Gunner and Randall do have one thing in common... They will kill for those they love.

This is the third book in the Southside Skulls MC Series.
This is a Standalone Romance Novel but is intended to be read after books 1 & 2… “DAX” and “CODY” where characters in those novels are main players in this story too.
HEA and No cliffhangers. Intended for Mature Readers.

Hmmm well where should I start my review for this book?!?!? I'm not quite sure yet. Look I love finding new MC series and have been with this series since Dax. And I really liked Dax's book, but these last two books I'm a little unsure about. Look Gunner is the third book in this series and follows Gunner and Tamara. This book can be read as a stand alone, but I would suggest reading the first two first so you know who people are.

Hmmm Gunner..... I had my moments with Gunner. Or maybe a more like/dislike relationship with him. There were several times I just rolled my eyes at his attitude. There were times where I wanted to smack him for his almost entitled ego. And yes I realize he was a younger guy. But there were other times I realized as he was a younger guy that he was just looking for a place to belong, people to call family. Those were the moments I liked him the most.

I really liked Tamara. I think she's the whole reason why I continued on with this book. She was smart, funny, independent, witty, and sassy. She definitely knew how things worked. But definitely didn't put up with shyt either.