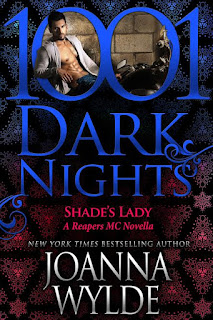 Looking back, none of this would’ve happened if I hadn’t dropped my phone in the toilet. I mean, I could’ve walked away from him if I’d had it with me.

Maybe it was all over the first time he saw me, and he would’ve found another way. Probably—if there’s one thing I’ve learned, it’s that Shade always gets what he wants, and apparently he wanted me.

Right from the first.

I have to say that the Reapers MC is a tried and true series that I always seem to go back to. I never get tired of the Reapers series. Although I missed the last book and haven't been able to read it yet. So to say I was ecstatic about being able to review this book is an understatement.

I loved Shade. If you don't know who Shade is, than let me tell you. He's the National Reapers President. And you would think being the national president he would have tough and gruff, maybe a bit hardened. He may have been all of those things. But I think in this book we got to see a kinder, sweeter side to him. I thought he was very likeable in this book.

I really liked Mandy in this book. She was a bit unexpected and also very likeable. She's trying to get her life together after getting screwed over by her ex-husband and than by her current boyfriend. She's also just trying to help her sister out.

I'm going to be honest here and say that even though they categorize this as a novella. I would say this could be considered a full length book to me. Usually to me novella's are much shorter. NOT that that's a big deal to me, because who can complain about more Reaper's. I have to say out of all of the books in this series this maybe my favorite out of all of them!!!!

Disclaimer: I received an ARC of this book from InkSlinger Promotions for my honest review. The opinions in this post are 100% of B

Posted by Busy Bumble Bee Book Reviews at 8:13 AM