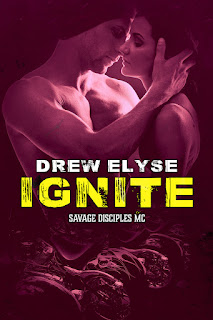 Once a Disciple, forever a Disciple.Ace has been keeping secrets, and not just from his club brothers.Secrets have a way of coming back to haunt you. All of his are about to be revealed,whether he’s ready to face them or not.A Disciple will fight like a savage—even against his past.When Quinn waltzes into the Disciples' clubhouse,she's only after one thing—and it isn't Ace.She wants closure, an end to what they started so long ago.But with the heat exploding, Ace and Quinn are far from over. When this biker is forced to confront his past, everything will ignite.

I have loved Ace since back in Sketch and Ash's book. And I couldn't wait to get to know him more. Ace is a man who has kind of been dealt a bum deal in life. After losing his mom when he was younger, he had to move in with his father and his family. Even though I felt for him and having to deal with being the outcast in his father's house, Ace had definitely left all that behind and made something of himself. And has even found himself a place to belong and family. Though he is keeping one big secret from them. Though you could tell right away how much he still cared for Quinn.

I thought Quinn was very likable in this book. I thought she was sweet, kind, quiet, and caring. There were a few times where I became a little bit irritated with her and thought there were a few areas where she could have been stronger.

Look as much as I enjoyed and loved this book..... I have to say there kind of felt like there was something missing in it to me. Like there was a disconnect somewhere. Although you could tell how much Quinn and Ace loved and cared for each other still, I never really a real connection between them. Also although we see a few of the Disciples and their women in this book, especially Ember. It just didn't seem like a Savage Disciples book to me. But other than that I did really love it!!!!

Disclaimer: I received an ARC of this book from Ardent Prose Promotions for my honest review. The opinions in this post are 100% of Busy Bumble Bee Book Reviews and may differ from others.