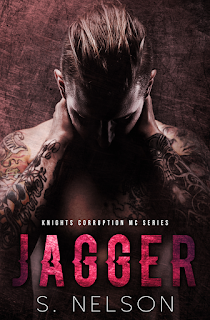 In order to prove his loyalty, Knights Corruption prospect, Jagger Blakeslee, readily agreed to immerse himself in situations that weren't meant for the faint of heart.

Every time, he stepped up.

Every time, he did what was asked.

Never questioning… until he met her.

Kena Prescott wasn’t like everyone else. Leading a simple yet lonely life, she preferred to live in the background, avoiding potential heartache by never bringing attention to herself or the challenge she faced on a daily basis.

Until a fated encounter with a stranger thrust her into a world she had never known existed.


He’d come to her rescue, but in the end, would she be the one to save him?

I have to say I couldn't wait for this book to come out ever since I finished Stone. I've actually been waiting for Jagger's book, since I read Marek's book. And finally we came to time that we finally got him and I'm so glad that I got a chance to read it.

I have to say ever since the start of this series I've felt for Jagger. I felt that he was misunderstood in some situations. And yes I understood he is a prospect, but at times I just really felt for him. In this book that didn't change any. In this book of course we get to know Jagger better and see how he just wants to prove himself to someone, anyone. Since his father obviously didn't care about him and didn't take pride in the things Jagger accomplished growing up.

I have to say, or better yet I'd like to say had mixed feelings about Kena. But that isn't exactly true either. I won't say I disliked her, because that isn't true. I just think it takes some time to get used to her character. I definitely liked that Kena didn't let the problem of her not being able to speak hold her back. I loved the relationship between her and her sister Braelyn, they cracked me up at times. And I loved watching the relationship between her and Jagger blossom.

I did really enjoy this book it was a good and exciting read. I will admit there were a few times that I skimmed through the pages, because it was just moving a bit too slow for my liking. But Mrs. Nelson definitely didn't skimp out on the chance to bring the action or the drama. I'm not going to give anything away, but there was definitely a moment where I got teary eyed. Of course I loved seeing the other character's also.

Disclaimer: I received an ARC of this book from The Hype PR via Netgalley for my honest opinion. The opinions in this post are 100% of Busy Bumble Bee Book Reviews and may differ from someone else.