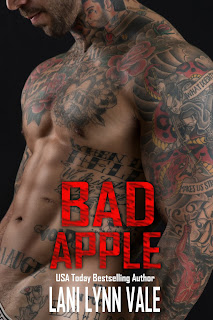 The road to hell is paved with good intentions…

Apple “Core” Drew needs The Uncertain Saints MC like he needs air. He is barely making it through the day, and each one that goes by takes him closer and closer to hell. Literally, not figuratively. He’s a half breath away from killing himself—maybe not by taking his own life, but he’s not against making someone else do it for him.

Then he meets her.

One of his club member’s sister, and his whole outlook on life changes. And not for the better. Just as surely as he ruined his life, he ruins her life, too.

One lapse in judgement on his part, and his one night of happiness turns into the worst nine months of his life. Which he would’ve thought was damn near impossible with the things he’s done and seen.

She never saw it coming…

It was the beard. The beard made her do it. That is a good excuse for having sex with a man she barely knows, isn’t it? Yeah, who was she kidding? It wasn’t the beard. It was the way he looked so dejected and solemn. The sad look in his eyes pulls her in, and the way his rough hands touch her makes her stay.

All she wants to do is take that look out of his eyes, but the consequences to her actions only make things worse, not better. One day is all she gets, and he’s not willing to give her more.

Until she dies, that is.

Then it’s too late.

I have to admit I usually dive in as soon as I get a Lani Lynn Vale book on my kindle. But than I usually read way too fast and have to wait for the next. Though this time I actually held off and waited till the last minute to read. Though I'm not sure if next time I can wait.

I loved Kitt and her brother Ridley's relationship. Even though her brother could be overbearing and watched over her 24/7 with her medical condition. The banter between her and her brother, and even Apple made me laugh. She definitely wasn't a weak character. Kitt was strong and independent.

Oh Apple. How my heart broke for him. He was definitely one of the ones you just felt for and I was drawn to him.

I enjoyed this book a lot. And loved seeing the other characters as well. We also get to learn a little more about Ridley.