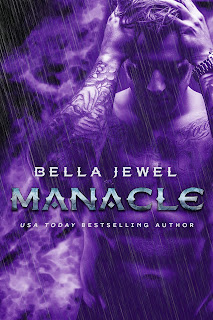 I’ve loved Danny since I was five.
He’s loved me longer.
It seemed destined that we would be together, it seemed like the stars had aligned.
Then we grew up and life got in the way.
He’s stepping up to be president of the Motorcycle club we grew up in.
And I want no part in it.
I want to be free, to travel the world and experience life without violence.
He’s not willing to give up the club.
I’m not willing to be an old lady.
But giving him up is like losing a part of myself.
Love isn’t easy.
Life certainly never is.
The manacles he has wrapped around me will hold me to him.
No matter how hard I try to run.

Look I've been a fan of both the Sinners and the Jokers. And I had been so excited that the kids were getting books of their own. You know because I'm always sad when things come to an end. And somehow of the kids get books, it always seems like it still goes on. That being said I also feel like its tricky to write the kids books.

That being said I will say that this book was better than Drifter. I didn't feel like there was pieces of the story missing, like in Drifter.... But and that's a Big But..... I felt like the story line in this series has been played in all three books. All three heroines are tired of the MC life, all three want out of the lifestyle, yada yada yada......

Danny and Skye what can I say about them? Throughout the other two books these were the two I probably liked the most. You could tell they were attracted to each other. And I wanted to see how that played out. Than in this book I didn't feel that connection between them. They spent half of it going back and forth. Pushing each other away and than coming back together.

I'm sorry to say if there are any other books in this series I don't think I'll be reading them.


Disclaimer: I received an arc of this book from Give Me Books for my honest review. The opinions in this post are 100% of my own and may differ from others.