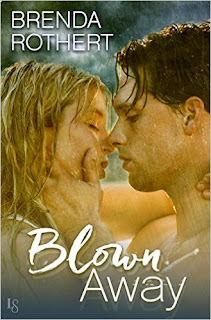 In an emotionally charged, wickedly hot novel of love and loss, a passionate affair gives two daring storm chasers the strength to overcome shattered dreams and the courage to build a future together. One year after her fiancé died in a heartbreaking accident, Drew McGovern decides to honor his memory by joining his old storm-chasing buddies on their latest excursion. What she’s not so sure about, however, is whether she’s ready to move on. Drew wasn’t expecting to feel the powerful pull of desire toward Colby’s best friend. But there’s no denying the intensity of their connection . . . or the heat he inspires in the parts of her that are still very much alive. Aiden O’Neal doesn’t trust himself around Drew. He’s wanted this girl for a long time—long enough to remember the stab of jealousy he felt the first time he saw her in Colby’s arms. Now he’s trying his best to behave himself. But when the wind starts blowing and the adrenaline starts pumping, Aiden can’t resist the urge to claim Drew as his own. Because when it comes to desire, he’s hoping to make lightning strike twice.

If you have never read a book from author Brenda Rothert than this would probably be the book you might want to pick up. I have been a fan of Mrs. Rothert's ever since I picked up the first book of her's I read. I will actually admit I had no clue what this book was about when I first started reading it. I think I may have forgotten to read the description or something.

So when I started reading and figured out that it was a storm chasing book, I kind of sighed and rolled my eye's (And I don't mean that in a mean or negative way). But being born in and living in Tornado Alley all of my life. I'm kind of picky when it comes to these kind of books. I usually find books that deal with this unrealistic and blown way out of proportion. But Mrs. Rothert did a wonderful and believable job writing this story.

I actually loved Drew's character. She's just trying to move on after losing her fiance and really just trying to find her way. Trying to find where she really belongs. She's just kind of been taking care of everybody else in her life after her father's death. I thought Drew was sweet and caring. I also felt for her and everything she had been through.

I loved Aiden. He has his own so not happy past, he lost his whole family to a tornado. Now he finds himself being a storm chaser and teaching rescues after a storm. I felt for the little boy he used to be that didn't have the love and support that he really needed back than. Though I'm sure his uncle did his best to raise him. And my heart broke for the man that he was that didn't let people get close probably for the fear he could lose them.

I really enjoyed this book and Mrs. Rothert takes us on a wild storm chasing adventure. We get to watch these two character's learn to move on, open up, and learn to love and live once again. I found myself giggling at one moment and getting teary eyed the next.

Disclaimer: I received an arc of this book from Netgalley for my honest review. The opinions in this post are 100% of my own and may differ from others.