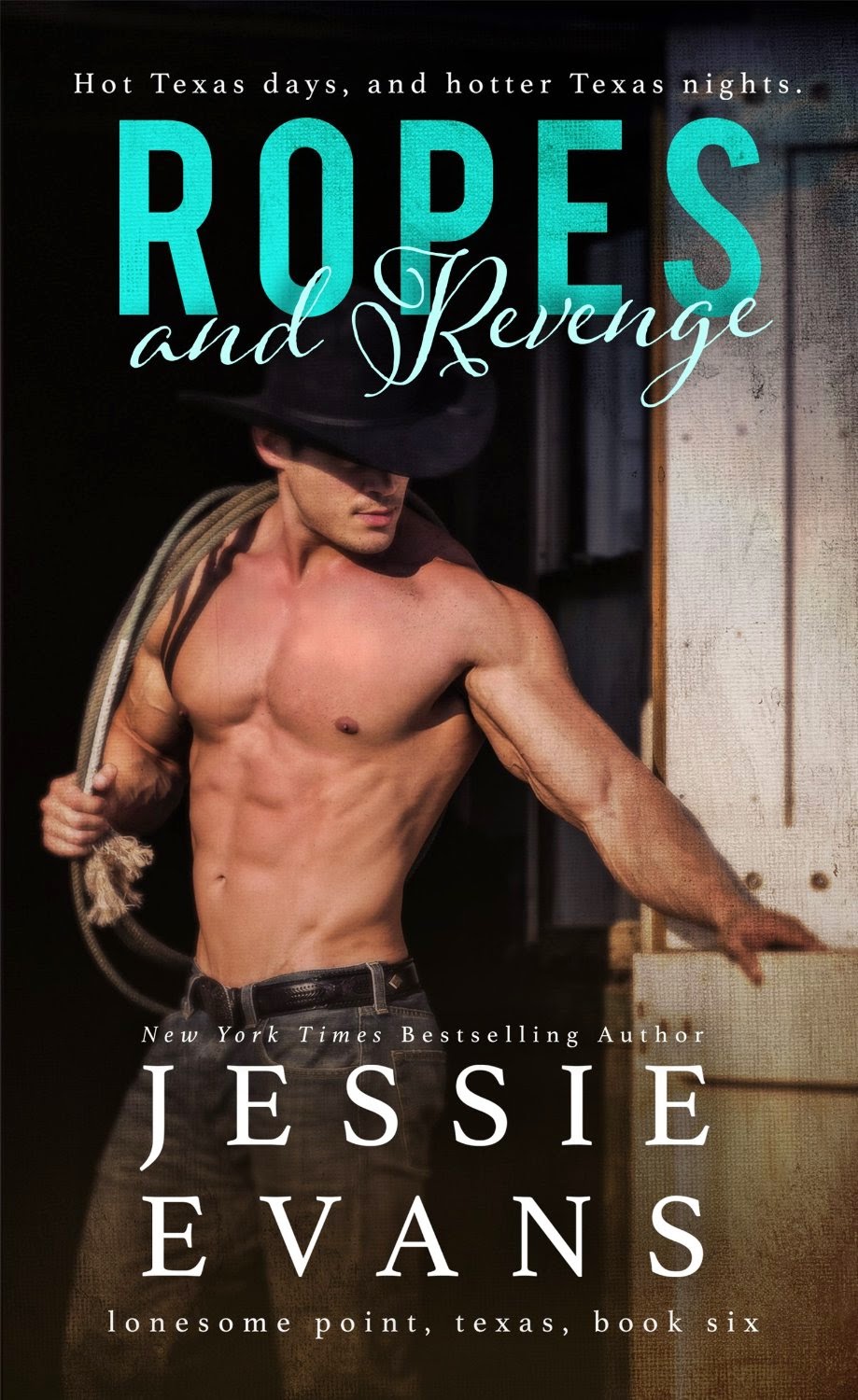 Title: Ropes and Revenge
Author: Jessie Evans
Genre: Contemporary Romance
Book Description:
Two broken hearts, one chance to make something beautiful with the pieces...Eight months ago, John Lawson lost his wife and best friend in a tragic accident on his family's ranch. In the time since, he's devoted himself to two things--taking care of his two newly motherless sons and proving that Lily's accident was no accident. Now, he finally has hard evidence that his wife was murdered and he won't rest until he has the killer's blood on his hands. He doesn't have time for anything but vengeance, especially not a crazy ghost hunter wanting to poke around the old spring on his family's ranch.

Persephone Styles--Percy to her friends--learned about ghosts the hard way, when she was orphaned by a violent crime at the age of seven. Ever since, she's seen spirits and been obsessed with studying souls beyond the grave. She's in Lonesome Point to document the town's spectral activity, but finds herself powerfully drawn to widower John Lawson and empathizing with his grieving children. For the first time in years, Percy is as riveted by the living as she's always been by the dead and longs to be a part of John's life.

But when one night of passion becomes something more, Percy realizes John is as haunted as she is and that the man she's coming to love is walking a dangerous road that may end with him becoming a murderer's next victim.

I have so many mixed emotions writing this review. I mean this is the last book in the Lonesome Point Texas series. Well at least for now..... And gosh I couldn't wait to get my grubby hands on a copy of this book. Ever since I finished reading Layla and Cole's story, I couldn't wait to read this one.
John who is the eldest of the Lawson boy's and had taken over the family ranch after his father died. And has pretty much been the rock that his family has needed. My heart broke for John when he lost his wife Lily in Cole and Layla's story. He's just kind of lost in the beginning of this story. He's still trying to prove his wife was murdered. I loved seeing John turn back into himself after meeting Percy. Though there were times I felt he was being a tad stubborn, but that was understandable.
I loved Persephone or Percy as she likes to be called. She's kind of the oddball, but in a good way. She's sweet, caring, open and understanding. I loved how she didn't give up on John and was understanding with him. I loved how she wasn't trying to replace Lily and wanted to show John that it was possible to fall in love with two people.
I loved this whole book and I love all of the character's the author Jessie Evan's has written in this series. Or I should say all of the Lawson character's. Mrs. Evan's definitely has a talent for writing a cowboy you can't help falling in love with. I loved that this book had the sense that no matter happens that everyone is capable of opening there hearts again and finding love again.
I'm giving this book 5 Out of 5 Stars and would recommend reading the whole series. And even though this generation of the series is over. I can't wait to read the next generation.
You can purchase Ropes and Revenge on Amazon, B & N, Google Play, Kobo and on iBooks
Disclaimer: I received an ARC of this book from the author for a honest review. The opinions in this post are 100% of my own and may differ from others.

Posted by Busy Bumble Bee Book Reviews at 11:14 AM