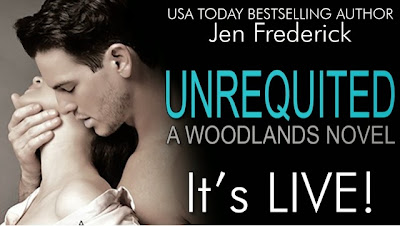 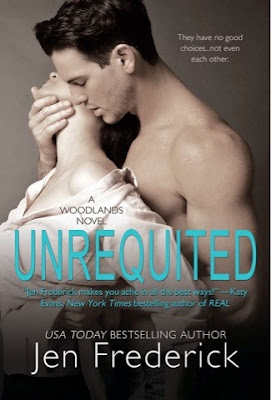 
Winter Donovan loves two things: her sister and her sister's ex boyfriend. She's spent her whole life doing the right thing except that one time, that night when Finn O'Malley looked hollowed out by his father's death. Then she did something very wrong that felt terribly right.

Finn can't stop thinking about Winter and the night and he'll do anything to make her a permanent part of his life, even if it means separating Winter from the only family she has.

Their love was supposed to be unrequited but one grief stricken guy and one girl with too big of a heart results in disastrous consequences. 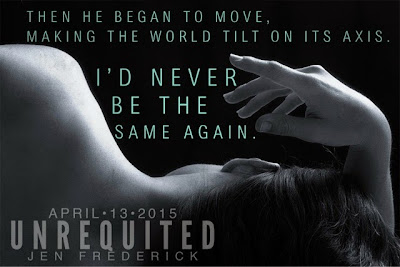 He didn’t give me much time. Inside the trailer, I got a glimpse of a desk piled high with papers, empty bottles of beer and pop, and a backpack with clothes spilling out of it before Finn began tearing at my clothes. He had my top off and was peeling my jeans and underwear off my legs before I took two breaths.

The motion put his face level with my crotch. “Well, fuck me. What have we got here? Bare, are you?” He stated the obvious. He ran his hand ran over the smooth skin, and I stifled a moan.

“No shit.” He stroked his hand between my legs. “You are no end of surprises. Are you more sensitive?”

He dropped his hand between his legs.
“What are you doing?”

“I’m squeezing my balls so I don’t come in my pants.” He huffed a few times and then slid a hand up the back of my legs, stopping just below my butt. “Open up. I want to know how you taste.”

I was glad he was holding me because the minute his tongue touched my clit, my knees buckled. His hands lifted me, and my butt met the cold steel top of his desk. I felt, rather than heard, his low chuckle. “You taste fucking delicious.”
He spun around and found his chair. Then he settled between my legs and dived in.

If I’d thought he was a good kisser, it was only because I hadn’t had him do anything else to me.

He worked his tongue against my clit and pussy like he was discovering the secrets of the world with each pass of his tongue along my flesh. Each touch was strong yet tender.

“Oh, Finn.” I clutched at his hair, grabbing fists of it in each hand. The feelings he was generating were so intense, I didn’t know if I should push him away or pull him closer.

He pushed my thighs apart, wider than I realized they could go, exposing every inch of me to him. I didn’t feel embarrassed, not with the happy noises he was making, not with the avid way he ate at me.

I was out of my mind with pleasure. When his fingers joined the party, there was no way I could stop the orgasm. Why would I want to?

He rose, and bereft of his intimate touch, I felt awkward.  He was still completely clothed, and I was buck ass naked on his desk. “We’re wrecking your desk. And I feel weird. You have too many clothes on.”

“Best use of this desk ever,” he said.

“Besides, you aren’t going to be the only one naked.” He tore at his jeans, and I tried to lean over to help. He brushed my hands away.

“Don’t touch me. I’m this close to losing it, and I want my first time to be inside you.” He cupped my face and kissed me.
He kept undressing. He toed off his boots. His jeans fell to the floor, and he kicked them aside. His socks followed and then his T-shirt in the one-arm-behind-the-back, over-the-head move that guys master when they are three.
He stood in front of me, hard muscle covered in pale skin. His large, thick-veined cock bobbed between us, and for a second I paused to wonder if he was going to fit inside me without an aid—like a bottle of lube.

He fished a couple of condoms from inside his jeans pocket and laid them on the desk. I shut out what that meant—how he’d had them ready and more than one. It was only for one night. That was all I wanted too.

So I watched as he rolled the nearly clear material over his heavy, erect shaft. The sight of him handling his member had me squirming on the desk. He reached his free hand between my legs, testing my readiness, and then held me open for him.

I bit my lip as the broad head opened me. Dots of sweat appeared on his forehead, as if the effort he exerted to keep from hammering inside was harder than building a house.

My head fell back as he eased out. His mouth found a sensitive place on my neck and then another on my shoulder right above the crease of my arm. He tucked his hands under my butt and drew me closer as my body opened and welcomed his.

He was large, much larger than I’d ever had, and I felt stretched to the hilt.

“You’re so goddamned tight,” he hissed through clenched teeth. He pushed forward relentlessly until he was sheathed inside my body from tip to base. “Stay still,” he ordered when I began to thrust forward gently.

The scratch of his hair against my bare skin was just one more sensation, and I was finding it hard to remain passive.
His labored breath in my ear was as much of a turn on as his hands roving over every square inch of my body. He was into me as much as I was into him. We were getting lost in each other.
Then he began to move, and the drag of his shaft along my tender tissues made the world tilt on its axis. I’d never be the same again.

He worked me longer than I’d expected. His eyes were closed, and his lower lip between his teeth as if he were concentrating on something very important.

In long, almost leisurely strokes, he pulled out to the tip and then thrust back in. Over and over until my entire focus shrank to the feel of his body moving between my legs. I grappled for leverage. His shoulders were slick with sweat. His biceps were too big for me to curl my hands around.

“More,” I gasped and dug my heels into the small of his back.

His eyes flicked open, just bare slits that in another context could have been menacing, but here were hot brands of need.

He savored me in a way I didn’t know was possible, so I let go. I lay back on the desk and placed my palms flat against the trailer wall, pushing forward to meet every slow thrust. I let him take me in a sweet seduction that turned me inside out, and when I came, I felt it in every nerve, fingertip, and toe.
When I convulsed around him, he let himself go.

“Hold on,” he said. And before I could respond, he planted one hand by my head and the other on my hip. He drove into my body with a force that had the heavy desk rattling against the floor.
I held on as he hammered into me. He shifted once, and then twice, and then his pelvic bone hit my clit just right, and I couldn’t keep my screams inside my body.

He half-laughed, half-groaned and went rigid in my arms, his hips pumping and thrusting until he’d released everything he had.

I held him as the aftermath of his orgasm shuddered down his spine and wondered if I could ever forget this night.
He’d marked me as permanently as any tattoo.

He hadn’t been bragging. He had plenty of stamina. After taking me on the desk, he stripped off the condom and grabbed a water bottle I had assumed was empty. He doused his dick and then placed a couple of handfuls of cool water between my legs. We found ourselves on the couch—him on his back with my knees around his head while I took him in my mouth. He was much better at multitasking than me.

Because he’d already come, he lasted longer too. I felt I was orgasming every five minutes while I sat on his face. While I rode cowgirl, which really worked me over. While he bent me over the back of the sofa, one hand on my neck and the other clamped around my hip, pulling me back to him every stroke.

He didn’t come again until we were in the tiny shower in the back of the trailer. There wasn’t room for one person, let alone two, and water was everywhere, but Finn said to ignore it. He was. He was too busy driving his cock inside me.
I tried to memorize it all because this was my only time with him. We dozed on the couch for a little while, and when I woke, little fingerlings of dawn were creeping into the trailer through the slatted blinds.
I took him into my mouth, slowly savoring the musk of his body, inhaling the warm sleep scent of him.

He grew hard and too long for me to take in entirely, so I added my hands, cupping the base and working him at the top until he was pulling my hair away.

“Gonna come,” he said in a gravelly, barely awake voice.

I pushed forward until he hit the back of my throat, and I didn’t stop until he was coming in long, lovely spurts into my mouth.

“I’ll return the favor when my brain falls down from the sky,” he muttered sleepily. I smiled sadly and waited until he fell asleep.

Then I gathered up my clothes and left.
It was a twenty-minute walk back to the café and then a fifteen-minute drive home, but it felt like the longest journey of my life. 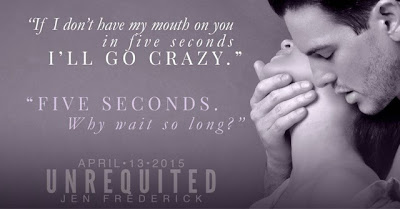 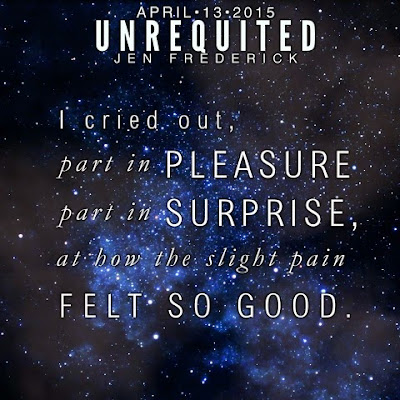 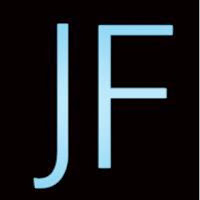 Jen Frederick lives with her husband, child, and one rambunctious dog.  She's been reading stories all her life but never imagined writing one of her own. Jen loves to hear from readers so drop her a line at jensfrederick@gmail.com.
Website: http://jenfrederick.com/blog/
Facebook: https://www.facebook.com/AuthorJenFrederick
Twitter: https://twitter.com/jensfred
Goodreads: http://tinyurl.com/p3ptasx