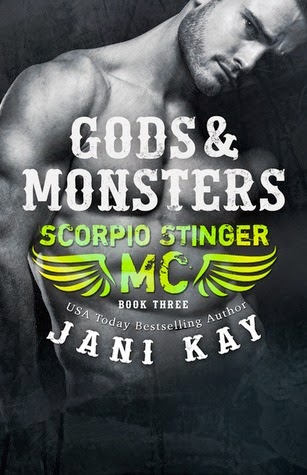 I never look in a mirror. I don’t need to. If I want to see what I look like, I just look at my twin. Daemon and I are identical in every way — from the outside. That’s where it ends.

Born five minutes after me, my brother hates that he came second. It irks him that I breathed life into my lungs first. Ever since he’s been trying to steal everything I have. Everything I love.
To own it first.

Until the day I, Cobra Malone, become president of the Scorpio Stinger MC. I throw him out like the garbage he is. Rotten filth won’t be able to taunt me any longer.
How wrong I am.

Evil knows no barriers. It stops at nothing. It won’t rest until it gets what it wants. And he wants what is mine. MINE. He wants my woman. My air. My reason for living.
I’ll die before I let him take Mia from me.

Will this be a battle to the end? Till the last man is left standing?
When two wills this strong clash, there will be chaos . . . and blood.
Who will win? The God or The Monster?

This actually the first book that I have been able to review from this series which is hard for me to believe. This book is definitely darker and grittier than any of the other books in this series. It was great getting to know Cobra and Mia better and getting to know their story in this book. There were definitely things I found out in this book that I didn't know. It was also nice to get to see how Cobra and Mia meet and ended up together.

I really liked that we get to know Cobra in this book. I liked him in the other books. But I liked him even better after this book. Even though he might be the President of the Scorpio's MC and rough around the edges. In this book you get to see a softer, more caring side to him. Especially for Mia.

I have always liked Mia also in this series. She has always seemed so sweet and in a way innocent in this series. In this book its no different. It was nice to see where she came from and really get to know her background more in this story. And I have to say even though she may seem sweet. She does have a tougher side to her.


I really enjoyed reading this book. I liked that it started where we got the chance to see the dynamics between Cobra and Demon when they were younger. I can definitely say there is no love lost between those two. Than getting to see how Cobra and Mia first meet and got together. I have to say there were definitely some WOW moments that I don't want to spoil for anyone but. Yes this book I felt was a little darker and grittier than the other books in this series. But I think it was great for this book. There is also a scene that could be a trigger for some people but I felt that Jani Kaye wrote it in a tasteful way.

I'm giving Gods & Monsters 4 Out of 5 Stars and would recommend it. I can't wait to read the next book in this series.

Disclaimer: I received an ARC of this book from the author for my honest review. The opinions in this post are 100% of  my own and may differ from others.

Posted by Busy Bumble Bee Book Reviews at 10:31 AM