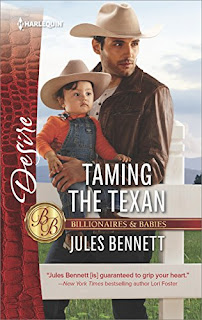 Stranded with a rich, rugged rancher…

But then she meets brooding Texas rancher Hayes Elliott. Heir to an empire and suffering deep emotional pain, he tries to push her away—even as she craves his touch.

And when a storm strands them together, their undeniable chemistry explodes. Now Alexa finds herself introducing Hayes to her precious son, imagining herself in Hayes’s world and keeping secrets that could destroy everything…

So I have to say I thought the next book in this series was going to be Beau's. Not sure why I thought his was next, but I was surprised to see it was Hayes book.

Let's start with Hayes. He's a man that has many demons sitting on his shoulders. He's a man who has come home and has his brothers there for him. He's a man though that won't open up to his family. I thought he was sweet, kind, and caring.

I wanted to like Alexa. And its not that I didn't like her, I did in a way. I thought she was a strong woman who had found a way to take care of herself and her son after losing her husband.

I thought this book was enjoyable. I loved that Hayes finally got his story and his HEA. I can't wait for Beau's story.