Cayda has spent her entire life training to slay a Fire Scale. Now the time has come to leave her dragon-ravaged village behind, march into the Summer Alps, and reap the rewards of a Champion. But the road between poverty and prosperity is rife with beasts, betrayals, and baser temptations. Sensible Cayda soon discovers she’s not the only Champion with her eye on the prize, or the only one wearing a disguise. A Wild and Unremarkable Thing pits girl against dragon in a stunning blend of Greek mythology and medieval lore. Don’t miss the thrilling novella that readers are calling poetic, enchanting, and a must-read for fans of fantasy! 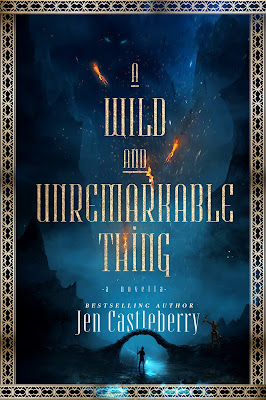 “A wild and remarkable journey…Polished, vivid, and extraordinary…Completely mesmerizing!”  -Chantal Gadoury, author of The Songs in Our Hearts ​ “Poetic…The perfect balance of simplicity and eloquence…I highly recommend it to lovers of fantasy and dragons!” -Harley Is Reading “Poetic…Fairytale like…Laugh out loud!” -Laura Bookish “An enchanting read filled with dazzling descriptions and a sumptuous plot!” -January Rabbit “Must read! [Cayda] proves that girls can do anything!” -Rachael Hansen, Goodreads Reviewer “Greek mythology mixed with some badass Mulan vibes…I was totally enthralled…[Cayda] makes me feel like I can do anything!” -Cake Face Reader “Extremely relatable…Praise-worthy…A breath of fresh air!” -Rattle The Shelves

The Fire Scale flies low over Ithil. Its body is the breadth of a circus tent. Its breast is striped by veins as broad as the boughs of a mighty oak. Its roar is like the howl of an angry wind. It gleams in the starlight. Its scales are ruby-red. No wonder just one of them is worth its weight in gold, and there must be thousands. They sparkle, catching the glow of lamps and torches below - flat, fluttering discs that ripple against its skin like a scarlet coat of suns. Its leathery wings beat, once, twice, like a tribal drum, like a thunderclap, and out of its yawning mouth, a blaze erupts, engulfing everything. One breath, and Ithil is black as ash. Ithil, gloating Ithil, built of white sandstone. Built by the hands and backs of scholars. One breath. Libraries and the proud, columned summer homes of wealthy merchants are set alight. Every inch of lush, green earth in the airy market square is grit and gravel in an instant. Screams rise up like a symphony, sobs and the worst swears men can muster. Just outside of the town gates, in a field not far enough away for anyone’s liking, crystal champagne glasses fall into the grass. Girls in their finest gowns faint or flee, and some are trampled underfoot. In the heart of Ithil, beneath a brightly embroidered tarp, drunks and costumed children lie dead or dying. They make groaning prayers as they bleed and burn, mouths flush with the rose-cobbled street. One, two. The Fire Scale is high above the burning town. It gapes, and smacks its lips. Embers teeter over its tongue and tip out between its wide-gapped fangs. One, two. The Fire Scale breaks through the clouds and inky phantoms swirl in its wake. Some Ithites watch its yellow talons shove aside the stars. So quick, it came, it left. A breath. A fast-ascend, and it is gone. And Ithil…Ithil is on fire. 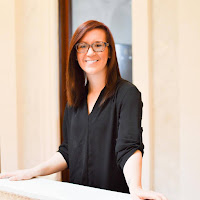 Jen Castleberry resides in Virginia Beach with her husband and pets. Her background is in Communications and Animal Welfare. All of her pets are named after superheroes! For more info, visit www.jencastleberry.com 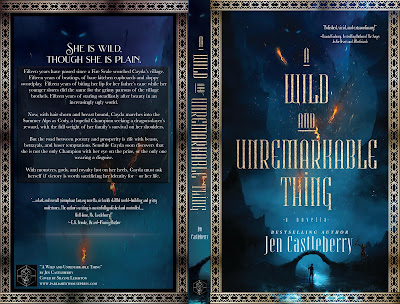 Posted by Busy Bumble Bee Book Reviews at 7:45 AM