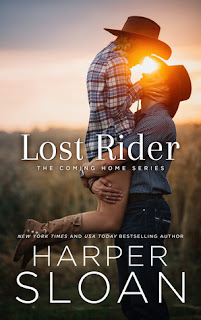 In Lost Rider, the first Western romance in New York Times and USA TODAY bestselling author Harper Sloan’s Coming Home series, an injured rodeo star encounters an old flame but will she be just what he needs to get back in the saddle?

Maverick Austin Davis is forced to return home after a ten-year career as a rodeo star. After one too many head injuries, he’s off the circuit and in the horse farming business, something he’s never taken much of a shine to, but now that it’s his late father’s legacy, familial duty calls.

How will Maverick find his way after the only dream he ever had for himself is over?  Enter Leighton Elizabeth James, an ugly duckling turned beauty from Maverick’s childhood—his younger sister’s best friend, to be exact, and someone whose heart he stomped all over when she confessed her crush to him ten years back.

Now Leighton is back in Maverick’s life, no longer the insecure, love-stricken teen—and Maverick can’t help but take notice. Sparks fly between them, but will Leighton be able to open her heart to the one man who broke it all those years ago?

Written in the vein of Diana Palmer and Lindsay McKenna, this Texas-set series is filled with sizzle, heart, and plenty of cowboys!

Ok I'm going to be completely 100% honest here, which I usually think I am with my reviews. I sometimes think people sugarcoat their reviews and just give out 5 Stars way too easily. And I already know there's going to be a ton of 5 Stars for this one. And that's fine by me, because that's that persons personal opinion. I was a fan of Mrs. Harper's back in her Corp Security series. But I've taken a break from her books for awhile, for personal reasons. But I thought, "Hey new Series. New Attitude." And thought I would give this series a chance. And I mean who can resist a former bull riding cowboy.

I really liked Maverick. He's a young man who is now dealing with the fact he can no longer be a bull rider and is now heading back home after the passing of his father. I thought he sweet, kind, caring, smexy, and definitely swoon worthy.

I thought Leighton was a likable character. After her little fits of a temper tantrum at the beginning. You kind of have to warm up to her, at least I did.

Alright so although I did end up enjoying this book, here is what I disliked. I found for the first maybe 25-40% of the book I couldn't get into it. I honestly almost put it down and didn't finish it. I found that what I'm sure was just supposed to be banter between the characters, I found it to be childish and temper tantrum-ish. I actually rolled my eyes at those points and was like, "Get over it." I also kind of became irritated I guess you could say by the obvious jealousy that Maverick's siblings Clay and Quinn have for him in the beginning.

Other than those few things that I just mentioned I did enjoy this book.

Disclaimer: I received an ARC of this book from InkSlinger PR for my honest review. The opinions in this post are 100% of Busy Bumble Bee Book Reviews and may differ from others.


Posted by Busy Bumble Bee Book Reviews at 10:05 AM