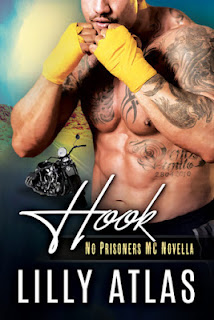 After ten years away, Marcie is finally venturing back to where she grew up. She isn’t in town for twenty-four hours, when she crosses paths with Hook and Striker, the two boys who kept her safe and happy as a young girl. Only they aren’t boys anymore. They are fully grown, muscular, and alpha men. Members of the No Prisoners’ motorcycle Club. All through her teenage years, Marcie’s heart belonged to Hook. Not that he ever seemed to notice. And it appears that as an adult, not much has changed with regards to her feelings toward the sexy biker. But a bossy, alpha man is not what independent Marcie is looking for.
The moment Hook lays eyes on Marcie, it’s as though the last ten years apart never existed. He wanted her back when she was off limits, and it doesn’t take long before he realizes he still wants her. Marcie’s changed, though. She’s no longer a frightened teenager in need of a safe haven. Now she’s a beautiful, confident, and a bit too independent woman. Will Hook be able to convince Marcie a life with him wouldn’t stifle her independence? Their relationship is tested when Marcie clings to her hard-won life and when an aspect of that life threatens not only their future together but their safety as well.

This book was a quick fast read with lots of content and some action. This was kind of a second chance book, though not really a second chance if you know what I mean. I'm probably confusing some people.

Marcie and Hook are no strangers to each other. In fact they grew up together with Striker. In fact Striker and Hook were really Marcie's protector's growing up. Marcie and Hook had kind of had crushes on each other back in the day, but never acted on it since Hooks a few years older. Now they have a chance to be together.

I thought that Marcie and Hook's characters were very likable. I loved watching both of them realizing they had a thing for each other back in the day and realize they really had a chance now. I do have to say even though this was a short read (and really wish it had been longer). There was no shortage of craziness, action, and hotness.


Posted by Busy Bumble Bee Book Reviews at 7:35 AM