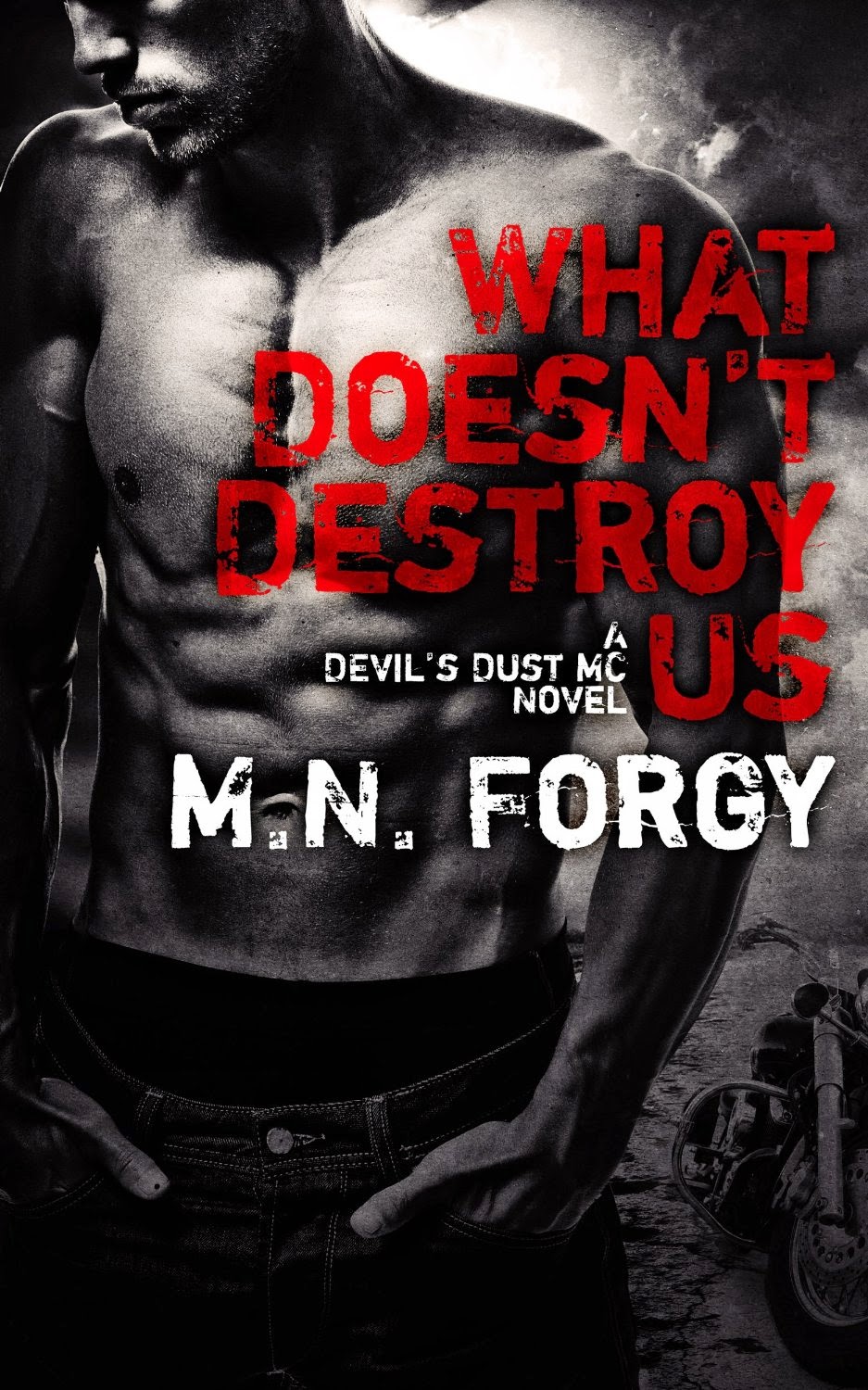 Title: What Doesn't Destroy Us {A Devil's Dust MC Novel}

When Dani's sheltered life is turned upside down by her mother's secrets, she finds protection with her estranged outlaw father. Against all warnings, she falls for bad boy biker, Shadow. He is beast and beauty sealed in a leather cut with a gun holster. Can Dani learn to live within the Club rules? Is she more like her father than she could imagine?

Shadow has grown up among drug addicts, whores and murderers. The only family he's ever trusted has been the Devil's Dust motorcycle club. He will do anything for a brother; even kill. In fact, killing is so easy, he's made a career of it. His one regret is not being able to kill his own worthless mother. When Dani shows up with her provocative temper and innocent charm, Shadow begins to question his violent lifestyle. But can he trust her with his demons?

Will Dani and Shadow let family ties destroy them?

This was the first book I had read from author M.N. Forgy. And as I've said in a couple past reviews that I have done on MC books, I'm very picky when it comes to them. Some are written really well and some are not, though I think that's true with all books. And I just have to say this book Did Not disappoint. All I can say is Wow, just wow. It was dark, it was gritty, and it was just one of those books I couldn't put down. This book starts off with a bang.
Danielle or Dani is a likable character. She seems a little naive about everything in life, but I think that is because of te sheltered life her mother kept her in. But despite that she is strong and independent, something which her mother tries to squash in. Dani gets to meet her father after years of knowing nothing about him and seems very excepting of the MC's lifestyle. I thought Dani real self really came out and became stronger once she meets her dad.
Oh Shadow, Shadow, Shadow... There were times I just wanted to reach through my kindle and hug him. Shadows character has had a ruff life. He's dark, he's leathal, and he's one of those guys you probably should just stay away from. But there's something that just pulled me towards his character.
This was a great first book from M.N. Forgy. The book had nice flow throughout the whole thing. And it grabbed my attention right from the beginning. It has a little bit of everything in it. It's dark, it's gritty, it has the drama you would expect, it's got the hot smexy scenes and it has some What the heck moments. I don't want to give away anything if you haven't read this book.
I give this book 4.5 Stars Out 5 and would recommend it. I will warn you though if you haven't read this book it does end on a cliffhanger.

Disclaimer: I received a copy of this book from the author for my honest review. The opinions in this post are 100% of my own and may differ from others.