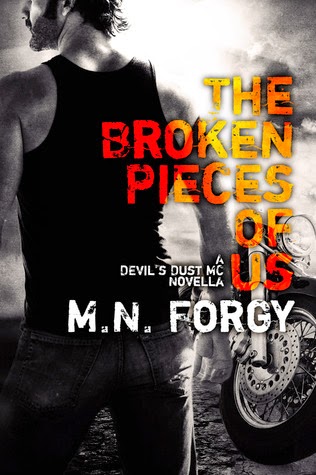 Title: The Broken Pieces Of Us {A Devil's Dust Novella}


*Previsouly found in the Unsound anthology*


***WARNING - This is not your typical happily ever after.
Babs is no stranger to the MC world. As an ol’ lady, she takes the hell that comes with it and dishes it out times two. When things take a turn for the worst, it leaves her questioning just how equipped she is for the hell she lives. She thought her marriage with Locks was it; that she had it all. But the past has a way of sneaking up and tearing life apart. Finding herself trapped as Locks’ ol’ lady, with the threat she will be his till the grave, her world spirals out of control. The only person risking it all to save her is the last person she thought would care: Bull.
The president of the Devil’s Dust MC, Bull, is good at running women off and is even better at pissing off his brothers. When he sees the way his vice-president is treating his ol’ lady, he tries to keep his thoughts to himself. The one thing Bull insists on in his club is respect and loyalty: respect for the patch, respect for your brother, and loyalty to the club. However, after finding Babs in a harsh predicament after a run in with Locks, he can’t help but step in.

Crossing lines and hurdling around life’s unpredictability, will they find refuge in each other or will they have to endure what life gives them.
My Review:
First of all I have to say this really isn't meant to be read as a stand alone. I mean sure you could read it as a stand alone, but you might be confused about what's going on and who all the character's are. So I would probably make sure you've read the first two books in the series.

This short story of course is in just Bull's and Bab's POV's and starts just right before Bull's daughter Dani shows up in the first book. I really liked being able to get to know Bull's character a lot better. And even getting to know Bab's character a little bit better.

I'm really trying not to give away to much here just in case you haven't read the other two books. But let's just say I knew there was a little softer side to Bull underneath his tough exterior. I mean we see it when he interacts with Dani. I just love Bull.

Bab's was just her Bab's self. She was her tough as nails, independent, sassy self. And it was nice to see how she was with Bull.

I have to say I cried reading this book. Even though I knew what was eventually going to happen. Not one of those ugly cry's that people talk about, but definitely had the tears running down my cheeks at one point. And let's just say I never cry during a book. I may get teary eyed during a book, but I never cry. I've cried maybe a total of 2 other times reading a book.

I really enjoyed reading this book. I think M.N. Forgy did a great job making Bull seem more human. Than the kind of cold hearted leader of the Devil's Dust. I just hope before the end of the series that Bull can find his own HEA.

I give this book 4.5 Stars out of 5.
You can now purchase The Broken Pieces Of Us on Amazon, B & N, and on Kobo.
Disclaimer: I received a copy of this book from the author for my honest review. The opinions in this post are 100% of my own and may differ from other's.

Posted by Busy Bumble Bee Book Reviews at 10:57 AM