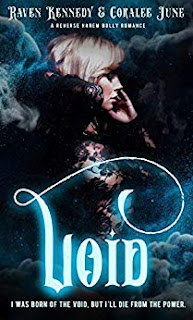 I was born of nothing.I’m a Void, a rare supernatural capable of absorbing powers at the brush of my skin.Feared. Hated. Untouchable.Thibault Academy is full of supernaturals that want me dead, and the most powerful of them, the Paragons, will stop at nothing to ensure I go back to the hell I came from. They’re cruel, heartless, and have created an unlikely alliance to take me down.If I want to learn how to control the nothingness, I’ll have to survive them.I was born of the void, but I’ll die from the power.This is a reverse harem bully romance.

So I was going to wait to leave my review on this book for a few day's so I could really wrap my head around what I wanted to say about it. Also, honestly, I was going to wait to read this book for when I had more time. But I ended up downloading it yesterday afternoon and couldn't put it down, and finished it within a few hours. So for the past couple of weeks, I've been a bit hooked on the Reverse Harem/Bully/High School-ish Genre type books. And although I like Paranormal books, I'm a bit picky when it comes to them. So its unusual for me to just pick up a Paranormal book by an author I'm unfamiliar with. That being said this is a first time for me to read anything by either of these Author's.

Let's start with Devicka, aka the Void. Devicka is a young witch who hasn't had the best bringing up in life, she's kind of been thrown to the side like trash by her own mother and the paranormal community when she came into her powers. She has been labeled a social outcast because when she came into her powers she found that she was a Void, and by mistake striped her mother of her powers. I have to say that I really felt for Devicka, I think this is the first time in a long time that my heart cracked for a character every time one of the other characters in this book referred to Devicka as Void, instead of her name. I mean honestly, I almost forgot her name because NoBody called her by her name, they all just called her Void hatefully.

Now let's get to the boy's who are all Paragons for their specific paranormal community.....

Render: is really the first one we meet, he's the one who is sent to retrieve Devicka from the human school her mother basically shunned her to. He's a Vampire, who is the Paragon for the Vampire community. He's also got a really nasty attitude when he meets Devicka.  Really he's an ar$ehole throughout the book, but after having a taste of Devika's blood becomes a bit obsessed with her.

Quade: Is an elemental witch like Devicka was supposed to be. In fact Quade had been her best friend as a child and was evidently supposed to be his match when they got older. Now he's the Paragon for the elemental witches and also has the biggest attitude against Devicka. I didn't get the whole connection between him and Devicka, I never really felt a connection between the two.

Uh Gritt: He is the paragon for the shifter community and is another one that Devicka meets at the beginning. He is also one who has the biggest attitude against her and what she is. He is also supposed to be her shifter mate. Gritt was kind of hard to like, he was so hot and cold.

So as I mentioned above at the beginning of my review this was the first time I have read anything by Author's CoraLee June and Raven Kennedy. Although I did really enjoy this book, I didn't love it, and I really wanted to love it with all the raving reviews it has been getting.

Here are my issues with the book:

1) It really just started out way too slowly for me and nothing really stood out and grabbed my attention making me want to love it. I actually almost stopped reading it, because that's how slowly it started.

2) I Never really felt a connection between Devicka and any of the guy's really. I think the closest one that probably had a connection was Gritt and that's because of the shifter mating. It kind of felt like the author's were like, "Oh we'll just stick them together once or twice and bam they have a connection."

Even through all of that, I did really enjoy this book. As for the bullying aspect of this book, it was on the lighter side, it was more of them just calling her Void the whole time. And there were some really great smexy times with all of the guy's. I just wish there was more.

Disclaimer: I got this book from my Kindle Unlimited subscription and came to me based on recommendations.
Posted by Busy Bumble Bee Book Reviews at 6:48 AM