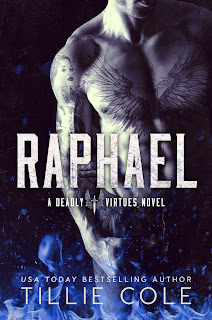 They are the Fallen. A brotherhood of murderers whose nature compels them to kill. But guided by their leader, Gabriel, the Fallen have learned to use their urges to rid the world of those it is better off without.For Raphael, sex and death are intertwined. Where there is one, there must be the other. He is a lust killer, luring his victims with the face of an angel and a body built for sin. And Raphael lives to sin. His newest mission takes him into the sadistic underworld of Boston’s secret sex clubs, and puts him face to face with his greatest fantasy made flesh.Maria is everything he’s ever dreamed of, the kill he’s always longed for. She’s not his target. And he knows he must resist. But the temptation is too strong…Yet Raphael is not the only one with a mission. Maria is not quite what she seems. And as her secrets and Raphael’s unravel, Maria begins to question everything she thought she knew—about evil, about the place she calls home, and about the beautiful sinner she was sent to destroy.Dark Contemporary Romance. Contains sexual situations, violence, sensitive and taboo subjects, offensive language and topics some may find triggering. Recommended for age 18 years and up.The Fallen: Genesis a prequel novella in The Deadly Virtues Series and MUST be read before RAPHAEL (DV: book one).

I'm going to start this review off a little differently and say that I have read almost everything by Author Tillie Cole. There's only a couple of her books that I have missed. But I have to say that with Mrs. Cole I know what I'm getting with her writing. To me, she is the Queen of Dark Romance and I know in the books it will dark and I know there will be some kind of questionable situations. When I heard about this series I got so excited because I thought it had sounded different and interesting. When I read Gabriel's novella, I absolutely knew that this series was going to push my limits. Limits I didn't even realize I had.

Ahhhh, Raphael, the fallen brother who's calling is strangulation. Raphael is a young man who watched his mother killed in front of him at a very young age. Now he himself finds that he wants to kill people in the same way that his mother was murdered. I have to be honest here and say I wasn't sure if he was going to be redeemable in this book. But seeing him with Maria, all you could do is root for the pair and hope for the best.

Maria, Maria, Maria (and for some reason now I have The Sound of Music running through my head). Maria is a young woman who was going to the sister church that the Fallen went to. She was becoming a nun, after being through her own terrible ordeal when she was a teenager.  She is roped into a deal by Father Quinn and Father Murray to trap Raphael, when Father Murray see's Raphael at a $ex club. At times I thought Maria was a bit too passive and nieve and had just resigned herself to her fate.

As mentioned above at the beginning of my review, I think this is the one series that is going to push my limits the most. I have to admit that there were a few times in this book that I almost put it down and didn't want to finish, but I pushed past my limits. I also have to say I felt like there were times where this book was moving way too slowly and I felt like Mrs. Cole was just filling it in with stuff to fill it in with. Other than that I did really like the book.