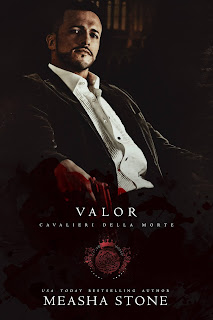 My orders were clear.


Get in, get the job done, and get the hell out.
No loose ends, no witnesses.
It's what I do. And I don't fail.
Until now.
She shouldn't have been there.
And now I have a new job.
Find and deal with Cherise Styles.

This is book number eleven in the Cavalieri Della Morte series. And is the first time I have read anything by Author Measha Stone. I have to say that this series has been one of the best I've read in a long time and has gotten better from book to book. Although this is a series, I feel as though each book would be fine as read as a stand-alone. In this book, we get Dustan and Cherise.

Let's start with Dustan. This is the first time we have meet Dustan and have really ever really heard of him. Dustan is, of course, one of Arthur's top Tebella Della Morte assassins and has been with him for over ten years. Now Dustan finds himself in kind of a pickle when one of his jobs goes sideways and someone has witnessed him taking out his mark. Now Dustan finds himself having to find the mark and deciding what to do with her. I liked that Dustan was a straight forward kind of guy.

Oh, Cherise... She's a young woman who grew up in a small town on a farm and once she could take off for the big city. She finds herself in a dangerous situation after she finally decides to come out of her shell and have a night on the town. I have to say Cherise made me laugh and I'm not particularly sure if its in a good way or not. On one hand, I liked that at times she seemed like she had a backbone and stood up for herself. But on the other hand, it annoyed me how many times she would just break down and seem a bit weak.

I have to say that although I did enjoy this book, it wasn't a favorite of mine in this series. In fact, as much as the past several books in this series have pulled me in and made me excited for this series, this one not so much. I guess I just wasn't feeling it as much!!!