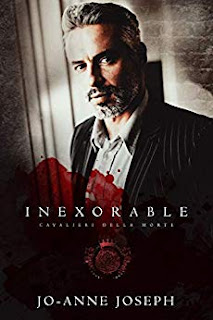 They call me a God, Demon, Monster,
Depends on which side of me they've faced.

I'm cold, with an insatiable thirst for blood, lust, and money.

If you've got my attention,
You're either next on my list, or about to slip into my sheets.

And I want Gaia.

The silver haired tyrant is a ruthless criminal,
The first time I saw him was in my mother's bed,
But the monster has set his sights on me.

When he offers me a bargain, I'm hard-pressed to refuse.

What lengths am I willing to go to be free of him, and how far will he go to stop me?

The trouble is those eyes and the fact that I want to know the story behind them.

So this book was originally supposed to be the last book in this multi-author, multi-book series. I have to say that probably since the beginning of this series I have been waiting for Arthur's story. And I had found it fitting that he was going to be last. But somehow he got moved to the next to last.

Arthur Calthorpe, the man, the myth, the legend. The head honcho himself. The leader of the men of the Tabella Della Morte. Arthur is a man who grew up in the world of ruthless criminals, his father was the boss before him. But Arthur is the man that brought together Tabella Della Morte. I had expected big things from him, especially with the way he runs things and keeping things from his Cavalieri men. Though I did enjoy getting to know him better and what made him tick. I found him to just be, ehhhhh....

Oh boy Gaia..... I honestly don't know if I have a nice thing to say about her. I didn't like her at all. I found her to be extremely irritating. I found that the author seemed to try and make her the female version of the Cavalieri men and it just didn't work for me. I know this may sound harsh but its the truth.

I wanted to love this book, as with the last few books of this series. But unfortunately, this book just didn't work for me. I expected BIG thing's from Arthur considering he's the leader of assassins, and unfortunately he was just kind of cooly there.  I expected this book to be on the dark side and it was just, ehhhh. And even though I found Gaia to be irritating, I found myself wanting to feel a connection between her and Arthur and I never felt anything between them.