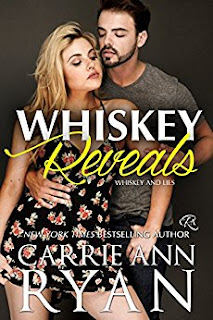 One whiskey-saturated night turns into something far more in the second standalone installment of the bestselling Whiskey and Lies series from NYT Bestselling Author Carrie Ann Ryan.Fox Collins likes his life just the way it is. His siblings are falling in love all around him, but he'd much rather focus on his next story than on a serious relationship. However, when his latest one-night stand returns to Whiskey-this time for good-he'll need to learn to trust his instincts to figure out if he can live without her in his life.Former dancer Melody Waters is finally ready to settle down in her grandmother's small Pennsylvania hometown. Bad decisions and fateful nights have changed her path more than once, but now she's focused on one thing: opening her new own dance studio. But fate is a funny thing, and once again, she'll be forced to learn that actions have consequences and some repercussions can not only change your life forever, they can also come back to haunt you…one broken promise at a time.Each book is a complete stand alone and can be read in any order.

So I'm just going to dive right into my review instead of giving you a long drawn out paragraph before I even start.

I really liked Fox in this book. Fox is the youngest of the Collins brothers. I thought he was sweet, kind, caring, and protective in this book. He was just one of those all around good guy's that everyone probably want to be friends with. I liked that he was a reporter who wanted to tell a story, rather than just get a story.

I liked Melody. She's a former dancer who is trying to get her life back on track. She's moved to a new town, she's taking caring of her grandmother who is quiet known around town, and she's opening her own dance studio. But she's carrying around a secret that's kind of weighing down on her and has now come back to bite her in the back side.

I will say this, this book was a good read. I did have a few issues with it though. I thought it kind of became repetitive, especially in Melody's chapter's and I just kind of found myself skimming through the book. I also think I missed the part where Mrs. Ryan mentioned Fox and Melody's ages or maybe I didn't. But I like knowing how old character's are in a book. Other than that the book was good and it had a bit of suspense to it.

I'm giving this book 3 Stars out of 5 and honestly can't wait for Loch and Ainsley's book!!!

Posted by Busy Bumble Bee Book Reviews at 8:59 AM