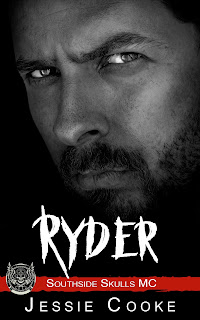 
A robbery, an obvious suspect, missing people, and a club president who doesn’t believe him… Ryder knows everything is against him, but his intuition has never let him down and he’s counting on it now, more than ever.

Storm was just trying to get by, dealing with the problems that kept getting thrown at her… and now this! She was already on the back foot, and life just took another step in the wrong direction - or was she destined to be right here, right now.

Time would tell, but time was running out faster than she could keep up.

This is the 12th book in the Southside Skulls MC Series. It is a Standalone Romance Novel but characters from the previous novels, DAX, CODY, GUNNER, ZACK, LEVI, KAT, HUNTER, GARRETT, WHEELIE, JIGSAW, RUSTY & CHOPPER are included in this story too.
HEA and No cliffhanger.
Intended for Mature Readers.
* * *
The Southside Skulls MC Series is about members of the MC club, and their friends and associates.
Each story, while focused around one or more main characters, is not necessarily about a Southside Skulls club member, but the story is related to Skulls members and the club.

So this is the 12th or 13th book in this series, because I'm not sure if you could count Jigsaw and Rusty books as whole books. Those two were more like novella's. Not that, that really matter's they were still just as good. Anyways I'm getting off track here, so lets just get back on track. Whichever number book this is doesn't matter, I still want more of this series however many books there are. I never grow tired of these character's. I'm not sure if this book is the last of the Southside Skulls or not and I'll explain that at the end of my review.

Let's start with Ryder. I liked Ryder, I thought he was sweet, kind, caring, and he had the whole smexy alphaness going on for him. Ryder is also a former nomad that had rode around with Garrett and Chopper. But felt like there was something a bit lacking or maybe missing in his life. But he has now found that settling with the Southside Skulls has seemed to ease some of what he's missing.

I have to say that at first that I thought Storm was awesome. At first that thought she was tough and had an edge. I don't want to say that I started to dislike her. But I did become a bit frustrated with her.

I thought this book started out with a bang and even brought some twists to it. As I mentioned at the beginning of this review I'm not sure if Ryder is the last of the Southside Skulls. I've heard that Mrs. Cooke is about to start a new series. Of course I loved seeing appearances from Hunter and Dax.

Disclaimer: I received an ARC of this book from Enticing Journey Book Promotions for my honest review. The opinions in this post 100% of Busy Bumble Bee Book Reviews and may differ from others.