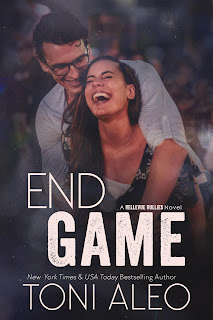 This is going to be Ryan Justice’s year. It’s his last year of college and his last year as a hockey player for the Bellevue Bullies. He’s making all the plays in preparation for achieving his dream of being drafted into the NHL.

This is Sofia Castilleja’s beginning. She is starting her college career as a star member of Bellevue’s brand-new gymnastics team. She’s going to tumble her way to success, first in school and then by realizing her dream of opening her own gym.

Ryan and Sofia didn’t see each other coming, but once they meet, they can’t look away. Their dreams are destined to take them in opposite directions.

But it doesn’t take them long to realize that waking up to reality together may be better than dreaming alone.

I have to say I was absolutely thrilled when I saw that there was going to be more of the Bellevue Bullies. Now I have to admit though I was hoping the next book from Mrs. Aleo would be Aiden’s Book. But hey I don’t mind it being Ryan’s book either.

If you’ve read Mrs. Aleo’s Assissians series specifically Taking Shots. Than you’ll probably remember Ryan as the one who called his Uncle Shea “Unky”. Now Ryan is all grown up and still trying to follow in his Uncles footsteps. Though there have been some major changes in the Justice household which were heartbreaking (I don’t want to give anything away), you’ll have to read to find those out. Ryan has grown to be such a sweet, caring, gentle, sincere young man. I just loved him to pieces.

Sofia had been training to be an elite gymnast for most of her life. When an injury sidelined her from going to the olympics. She finds herself fortunate with a full ride scholarship into the new gymnastics program at Bellevue. I found Sofia to be way way to serious at times and even way to nieve about things at times.

I really enjoyed this book and loved seeing the Justice clan once again. There were definitely tear filled moments where I just wanted to reach in and hug the heck out of Ryan.

Posted by Busy Bumble Bee Book Reviews at 8:20 AM