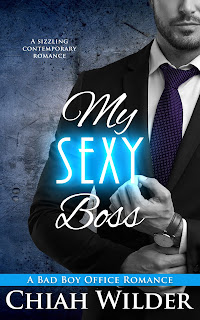 Trace Prescott was the reason I was in the nightclub consoling my friend’s bruised ego and shattered heart.

Then all of a sudden, there he was in the same club, flocked by a bunch of women.

And he had the audacity to check me out and flirt with me while I was getting another drink for my heartbroken friend.

Well, I went ballistic. I didn’t hold back and I told him exactly what I thought of his arrogant, cheating ways.

He made my friend think she was a queen with all the expensive gifts and dinners, but he forgot to tell her he had a princess he was banging on the side.

And all the gorgeous, sexy jerk did was smirk as I ranted. I almost threw my glass of champagne in his face, but he wasn’t worth the fifteen dollars it cost me.

Feeling good, I stormed off. But I did sneak peeks at him for the rest of the night and hated that he caught me each time.

Who cared? I wouldn’t ever see him again.

Imagine my surprise the following morning when my new boss turned out to be arrogant, sexy-as-sin Trace Prescott.

If I didn’t need the job, I’d quit, but I was stuck, and I refused to let his ripped body or good looks seduce me. I was a professional and would act like one. Yeah… easier said than done.

I noticed her right away, bending over the bar ordering her drinks in a black dress that hugged all her curves just right. I didn’t expect her to turn on me like a wildcat, cursing and telling me what a jerk I was to her friend. It took me a moment to figure out which friend she was talking about.

Women were drawn to me, and that suited me just fine. I loved being with them, and I always made sure I left them smiling and with memories that would last them a lifetime after I moved on.

I was great with seducing a woman just not so good with relationships.

But the way the feisty chestnut-haired woman yelled at me, got to me. She was a challenge, but she stormed out before I could make a move on her. Too bad.

Not for long. Guess who worked for me?

And I couldn’t wait to start taming her.

So I have to say I'm a big fan of Mrs. Wilder's and have been with her since Hawk's book. This book is a little different than what I'm used to with Mrs. Wilder. And it definitely shows that besides writing MC, she can be versatile in her writing.

I liked Cierra.  She was smart, kind, caring,  independent,  and a bit sassy. She definitely didn't hold back on what she was thinking.

I also really liked Trace. I thought he was kind, sweet, kind, and definitely all alpha male. I also felt for Trace and what his family had been through.

I have to say that this was a sweet, light, and enjoyable read.  Although this book was enjoyable, I kind of missed the intensity of her MC books. Though Mrs. Wilder did try and throw a twist in there.