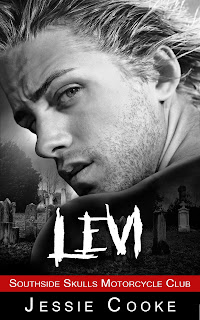 The night Levi's soulmate Krissy, got on the back of his fathers bike, it was the start of an unbelievable ride on the road to a new reality.

When you love someone so much that your souls are connected, that connection is forever.

A heart wrenching love story that will captivate you to the turn of the final page.
One night, one decision and everything changes.

This is the 5th book in the Southside Skulls MC Series.
It is a Standalone Romance Novel but characters from the previous novels, DAX, CODY, GUNNER & ZACK are in this story too.
HEA and No cliffhanger.
Intended for Mature Readers.

So I knew right away after finishing Zach's book that I was going to have to read this one. This book is a little different than other books and definitely different from typical MC books I read. And that are in this series. We actually meet Levi in Zach's book.

Oh Zoe, this poor girl. I felt for her too. She's a young woman who hadn't had the easiest upbringing. And because of that she hasn't made the greatest decisions in life either. But after one night of watching a woman die she decides to turn her life around and live. I really connected with Zoe, even though I've never personally had a drug problem. I've had family members that have had the problem and know how hard it is for them to kick the habit and how it affects family.

I really don't want to give anymore away about this book than I probably already have. But I do want to say this I think this is the first time in a long time where it's taken till almost the end of the book for a couple to get together.  But these two definitely do make up for it in their dreams.

I will say what I do like the most about this series is even though most of these guy's are coming from different clubs.  That Mrs. Cooke still incorporates the Southside Skull guys into the book.