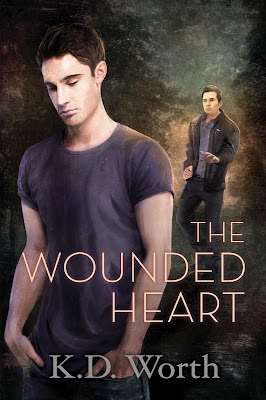 Teenage reapers Max and Kody are ready for their afterlife to settle down. But their boss, the mysterious Slade, fears that spirits stuck in limbo have taken an interest in Kody. Which means the spirits’ evil counterparts—the wraiths—can’t be far behind.

Max would be livid if he found out Kody was still checking up on his family, but Kody’s mother and sister are struggling after his death. Though it breaks all the reaper rules and may put him in danger, Kody wants to help them.

Unfortunately, the wraiths have found a doorway to the land of the living, bringing death and destruction with them. Max and Kody hope to stop them before anyone gets hurt, but they may not be strong enough.

Through devastating losses, an ominous prophecy, and a new destiny revealed, Max and Kody must find a way to trust and accept each other. Their enemies are powerful, but there’s a single force they cannot stand against—love. 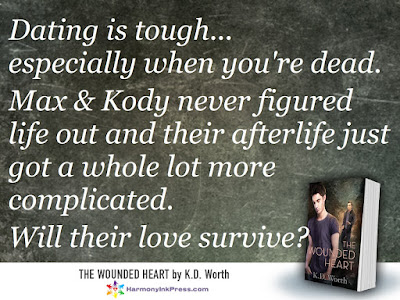 “Jeremy,” I began patiently, heart still racing. Forcing a deep breath and finding power from somewhere I didn’t know I possessed, I fixed all my concentration on him. “You died. You know that, right?”


Max told me wraiths looked like black, faceless shadow beings, and until Slade explained the difference, he’d assumed those wraiths in the diner were shades. Both of us wondered what shades looked like, and if they had any resemblance to dead spirits or if they too changed into something else.


Max shrugged. “Here, this is what he wrote: Today I delivered the Touch to a man my age, perhaps a year or two older—one could not be considered a boy after what we have seen. I stopped asking Slade long ago how old my charges were, for it has become quite depressing to me. His name is Eugene and he was yet another victim of a landmine, panicked and afraid like the others. But even as his legs reappeared and the chaos of the battle faded around us, he would not come with me. He saw the door but would not enter. He ran back into the battle, searching for someone named Karl. I cannot condone my failure, and guilt and agony gnaw at my insides. My poor Eugene. What will become of you?”


“That’s awful.” The powerful need to help souls get to heaven was ingrained deep within a reaper. I couldn’t fathom how I would feel if I had to face a similar situation.
“Can you imagine?” Max’s face scrunched up. “Trying to reap souls during a battle? Totally nuts. But he never says anything about what Eugene looked like, other than the thing about his legs, so I’m gonna assume he didn’t change much. Maybe that only happens after they become wraiths?”
Not as excited about this gay reaper as I had been, I pushed my chair back, feeling the weight of more than just a loss of energy from the crossover. This whole topic might intrigue Max, but I hated talking about it.
The day I became a reaper, Slade had said, “Kody has a purpose. He has from the beginning. Just took me a bit to figure out what it was. For now, he’s gonna be a reaper.”
For now.
Those words always made my guts knot. I had a purpose? Like what? Max seemed to think it had to do with the unique circumstances of my death. And though the wraiths had continued to follow Max, they had only confronted him the once—when I was with him. Something he was wont to remind me of. He also speculated I might have to help him fight these wraiths one day. But the mere idea of a spirit reanimating a corpse frightened me with thoughts of zombies eating brains and I wanted nothing to do with any of it. Apparently, I didn’t have a choice in the matter. “Kody?” Max placed a hand on my arm, startling me from my thoughts. I forced a smile. “Yeah?” “You okay? You kinda zoned on me for a sec.” “Um,” I began, standing up fast. The movement made my vision spin a little. “I just remembered I gotta do something for Slade.” “Like what?” Max said, scrutinizing me in a way that made me wonder if he could read my mind. I didn’t think he could, not the way we could hear our charges thinking or Slade heard our thoughts. But Max was a highly intuitive guy, making it difficult to keep him away from the things I didn’t want to bother him with. If he knew everything that was going on, he would be so upset. “Nothing big. I don’t wanna bore you.” I stepped out of his reach, bracing myself on the chair. Though Max’s constant warmth had revived me, I didn’t have the energy to stay and listen. I didn’t need another night of pacing my bedroom for hours—a habit Max knew nothing about—worrying about my future afterlife. He raised his brows. “You feeling okay?” Forcing a smile, I stood straighter. Pretending and hiding had been skills I perfected a long time ago. “Yeah, I’m fine. I’m just gonna go lie down. Helping people cross over takes a lot out of me.” “It does?” “Yeah, I’ll just go to my room.” “I thought you had to do something for Slade.” “Yeah, but I can do that afterward,” I said quickly. “You have fun with Ed.” He assessed me for a moment, then smiled. “Okay, I’ll catch you later. Maybe I’ll bring his journal and we can read some more together.” “I’d like that.” “You sure you’re okay?” “Never better.” When he turned back to the journal, my stomach knotted. Lying to my boyfriend had become a habit I didn’t know how to stop.

K.D. Worth has always considered herself to have the heart of a teenager with an old soul. When not talking to the characters living in her head, she loves to hang out at her favorite townie bar, then go dancing and partying with her husband and friends. There is always music playing in her home, and if it’s too loud, you’re too old! On the flip side, K.D. enjoys spending time in her vegetable garden, canning the food she grows, and making homemade jams and jellies. She also is known to crochet washcloths and blankets for her closest friends and smiles when they tease her for her “grandmotherly” ways. These two different sides to her personality create a layered tapestry of life experience that brings depth and believability to the characters she writes. She loves to hear from her fans almost as much as she loves her cocker spaniels. You can find her on Facebook or get updates about upcoming books on her website. 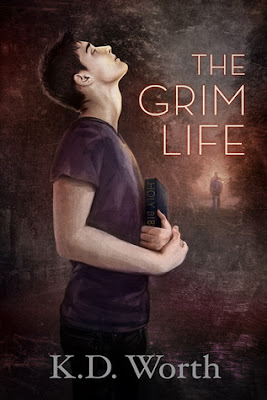 Posted by Busy Bumble Bee Book Reviews at 11:56 AM