The Beard Made Me Do It {Book Review} 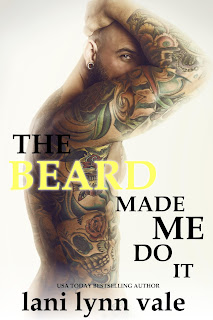 Those words had haunted him from the moment Jessie James had heard them muttered from the one girl, above all others, that he thought had his back.


Sixteen years later, he still feels those words like a brand on his soul.
Lucky for him he has a son to take care of, a full-time job that demands every single second of the day, and not a single moment to spare for the likes of a woman that won’t stand up for him when he needs her the most.


He’s only a friend.


The words had slipped out of Ellen’s mouth, and before she could recall them or better yet, explain, Jesse is gone from her life for good, taking her heart with him.


She tries to find her way out of the pit of despair, but not one single person, no matter how much she tries, can fill the void that he left in his wake.  Time heals all wounds. Or at least that is how the saying goes.  It’s a crock of crap, though.
Sixteen years pass when Jessie and Ellen see each other again without the influence of the town and bad memories surrounding them, and it’s as if not a single day has passed.


Ellen knows the instant that her eyes see her old love that she’s still just as much in love with him today as she was all those years ago. The problem is that Jesse wants nothing to do with her. Or at least that’s what he keeps telling himself.

Well I do believe that this was a good addition to this series. I'm so glad that we got the story behind Jessie and Ellen. I'm glad we didn't have to wonder any longer if they were really sneaking around. Or as the last book gave us a sneak peak, if there was actually something more between these two.

I actually really loved Jessie. There have been a couple of times in this last couple of books I've gone back and forth on liking him. I loved that he was a single dad and has been taking care of his son on his own for sixteen years. He's made something of himself for himself and his son, though I'm sure it hadn't been easy. Jessie was sweet, kind, caring, determined, protective.

I will say this it's not that I didn't like Ellen coming into this book. In fact I really didn't have much of an opinion on her. Yes I know, she broke Sean's heart. But I think it was obvious with the glances we got of her and Jessie in this series that there was obviously something with them. I'm actually glad she got her second chance with Jessie.

As I said above I think this book was a nice addition to the series. I'm not sure if Mrs. Vale had planned on writing Jessie and Ellen a book from the beginning or not. But it definitely gave us the story of and wouldn't keep us guessing if something was or wasn't going on between them.

Disclaimer: I received an ARC of this book from Enticing Journey Book Promotions for my review. The opinions in this post are 100% of Busy Bumble Bee Book Reviews and may differ from others.


Posted by Busy Bumble Bee Book Reviews at 8:30 AM