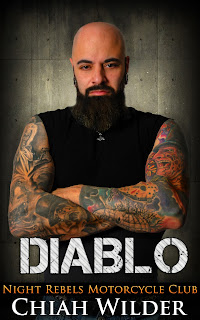 Diablo, Sergeant-At-Arms of the Night Rebels MC, doesn’t chase women the way his fellow brothers do.
Women flock to the ripped, bearded, tatted biker, but he pushes them away.
His past haunts him and rage burns deep inside him. His only focus is the club, his Harley, and his shots of whiskey. He doesn’t want a woman messing with his life. He doesn’t trust them.
Then he sees her. Her hazel eyes reflect sadness and regret. He’s drawn to the loneliness that fills her up—it haunts him.
She’s his employer’s daughter. He knows he should stay away from her, but he can’t.  He wants to take her in his arms and protect her, but she won’t even talk to him.
Diablo’s not the type to give up. He wants her, and he’ll do everything he can to make her his.
Fallon Richardson can’t stand a man’s touch.
Ever since her mother left her when she was a young girl, she’s been living in hell. Her father is the kingpin in illegal underground fighting. She tries to make herself inconspicuous so the men won’t notice her and the women won’t make fun of her, but it never works.
She hates being at the fights, but her father demands her presence.
Then she sees him across the room. His penetrating stare pulls her in no matter how hard she resists.
The tall, muscled man stirs feelings in her she has shut off for years. Her body wants him, yet, she can’t give herself to him. Men are cruel, animalistic, and not to be trusted. But the tattooed man has a softness beneath his rough exterior that speaks to her.
Then shadows from years ago emerge from the darkness, and soon Fallon doesn’t know who to trust. Her world is turned upside down, and she fears not only for her sanity but for her life.
Can Diablo and Fallon gain each other’s trust in time for him to protect her?
The Night Rebels MC series are standalone gritty romance novels. DIABLO is Book Three in the series. This book contains violence, strong language, sexual assault (not graphic), and steamy/graphic sexual scenes. It describes the life and actions of an outlaw motorcycle club. HEA. No cliffhangers. 18+.

My Review:
This is the third book in the Night Rebels series and I have to say I wasn't sure what to expect from this book. Except I have to say this has to be my favorite by far so far in this series.
Oh Diablo, I wasn't sure what to expect from him. He's the more quieter one of the Night Rebels, he's the one that tends to kind of sticks to himself. He's definitely different from any of the Night Rebel guy's or even the Insurgent guy's. My heart broke from him and his family situation, but he definitely found a way to come out of it stronger and made something of himself. I definitely fell in love with Diablo.
Oh Fallon. I loved sweet, kind, caring Fallon. My heart broke for her and everything she'd been through and everything she was put through. She definitely hasn't had it easy and is kind of the black sheep of her "family". She gets made fun of by the ring girls, she gets picked on by her "step mother" and "father" for her limp. But even through it all she had a big heart and mostly positive attitude. And she is definitely taken for a spin when she finds out there ton of secrets spilled about her life.
I just loved and adored this book and as I said above, I think this has to be my favorite book of the Night Rebels series so far. It captured my attention from the start and held it through till the end. There were twists and turns, and drama, and some smoking hot smexiness included.
I'm giving this book 4.5 Stars out of 5 and can't wait for the next one!!!!!