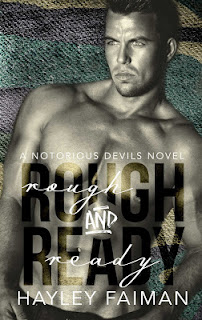 Cleo Hill is a married woman, in love with a man she's never really known—her husband, whom she hasn't seen in eleven years.

Paxton "Torch" Hill is a Notorious Devil, a man who's been wrestling with his personal demons since before he knew the horrors of war.

When a threat against his club means danger could be lurking around his estranged wife's door, Paxton is determined to protect her. Yet, one look at the woman he left behind, and he knows his plans are about to change.

The past is not an easy thing to forget, especially not for a woman scorned.

While Cleo isn't the innocent catch he once knew, there's something about that rough and ready man she's not sure she can deny.

After all—they promised each other forever.

*Recommended for readers 18+ due to Language, Sexual Content, and Violence

I've said it before and I'll say it again, this is one of my go-to MC series. I love anticipation of when the next book in this series is going to come out. I can never wait to get my grubby hands on it. I'm always jumping for joy when one of Mrs. Faiman's books lands on my kindle. And I have to say I couldn't wait to find out Torch and Cleo's full story in their book.

Now that being said Paxton, aka Torch, and Cleo frustrated me to no end. Oh my goodness there was several times while reading the book that I just wanted to throw my kindle to the other side of the room. Not just once, but several times. Like three or four times. I had to set down my kindle and take a break from the book, just so I wouldn't break the dang thing.

Paxton, Paxton, Paxton..... Or Torch, whichever you decide to call him. He's obviously a haunted man by the things he saw and did oversea's. Is he right for how he left his young wife Cleo when he got back? No..... Should he have given her an explanation? Probably..... Should he have waited a decade to get back in touch with her? Probably not.... But even with everything he most likely did wrong in all of that time you could tell how much he still cared and loved Cleo when he went to protect her.

Hmmmm Cleo. I wasn't sure about her at first. She seemed to have a very hard time of letting go of the past. And I'm not blaming her either, because I would have been exactly the same. But at the same time though when Paxton explained and wanted to move forward, she still seemed to be stuck in the past. But by the end of the book I was definitely liking her better.

I really enjoy this book even though there were several times I became frustrated with Torch and Cleo. They were both definitely stubborn and hardheaded. But I loved watching them working through their issues and getting to know one another once again, on a different level.

I'm giving this book 4 Stars out of 5 and can't wait to find out Soar's story next!!!


Posted by Busy Bumble Bee Book Reviews at 6:30 AM