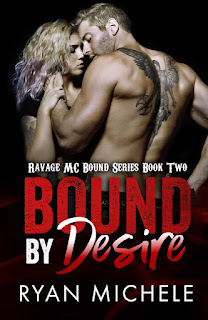 Have you ever wanted something so badly it consumes you?
There is a fine line between needs and wants.
Deke Gavelson has wanted his Ravage cut for as long as he can remember. He’s earned it. He was born to be in this club. He’s not afraid to fight for his place, either.
Then she barreled into his world, and Deke suddenly desires something more than his rag and winning the next round.
Rylie Hollister has lived through hell and back. Each event makes her the strong, independent woman she is today. Until a bitter underground fighter threatens to turn her plans upside down.
These two are bound by their desires, but oh, how that changes when his intensity meets her passion.

So after reading the first book in this spin-off series I have to admit that I was a little bit worried about this book. I was not very impressed with Deke in Cooper's book, but I promised myself I would keep an open mind with Deke's book and give him a chance. I tried to give Deke a chance I really did. But he didn't really impress me much more in this book than he did in Cooper's book. I just really felt like he was an overprivilaged, whiny, cry baby who obviously had some major anger issues. Who felt like everything should be handed to him. That even though he knows what he did was wrong and took off to protect his family, at the same time if felt selfish of him. I will say this though you could tell how much Deke still loved and cared for his family. Unfortunately I just wasn't feeling Rylie. She reminded me way too much of Princess and I've just never been much of a Princess fan. I have to say I actually had to re-read this book again to see if I could get into it more the second time around. And again I just couldn't get into and found myself just skimming through parts of it. I think that this book could have had been much better for me if I felt like I wasn't left hanging in places. I feel like there was an issue mentioned in this book that had made Deke take off in the first place and it seemed to play a big part in most of the book. And than it was just kind of dropped to be picked up later. Than I feel like Mrs. Ryan kind of just threw in some other drama to take place of the bigger drama of this book. I don't want this whole review to seem negative so I will say of course I loved seeing all of secondary characters that make appearances in this book. I will also with the way that this book ended I can only hope that Ayustin's book is coming soon-ish.I'm giving this book 3.5 Stars out of 5!!!!