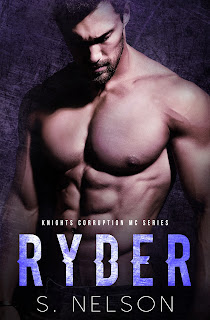 If secrets fester long enough they will devour a person’s soul, leaving them black and dying on the inside, blocking the smallest glimpse of healing light.
With steadfast focus, Ryder Casteel immerses himself in the club, working tirelessly alongside his brothers of the Knights Corruption to figure out how to end the war with the Savage Reapers once and for all.  The last thing he needs is the distraction of a feisty blonde.
Her sassy mouth intrigues him.
Her willingness to go toe-to-toe ignites the fire inside.
But when his nightmares suddenly return, he’s forced to reveal his secret.
A tragedy that happened many years ago, eventually shaping the man he became.
Braylen Prescott lives a charmed life.  She’s happy.  Content.  Then in the blink of an eye, her world changes when a gorgeous biker captures her interest.
He’s blunt.
He’s crass.
He renders her speechless.
But is the imminent danger surrounding him worth losing everything?

So I have to say I have been anticipating Ryder and Braylen's book ever since Jagger and Kena's story. Now this is the last book in the Knights Corruption series. Of course its always hard to say goodbye to a series and character's that you've become attached to.

Oh Ryder.... Beautifully broken Ryder.  And he really is a broken man. He's a man who doesn't share anything about himself to anyone and that includes his club brother's. A man who had to watch his mother taken from him when he was a child. I thought he was a man that wore the demons of his past heavily on his shoulder's.

I liked Braylen in this book. I thought she was sweet, protective, and sassy. Though at times she seemed very naive as to Ryder's and the Knights lifestyle. Though I'm not sure why considering her sister is with Jagger. I did like that through everything she wanted to stick by Ryder's side.

I will say this the beginning of this book moved a bit slowly for me. There was a lot of back and forth between Ryder and Braylen, but it was the same issues that they kept going back and forth on. So at times I found myself sort of just skimming through. I also kind of felt  like Ryder never really dealt with his issues and just left his club in the dark about himself.

Other than that I did really enjoy this book. Especially the ending (but I don't want to give anything away)!!!!

Disclaimer: I received an ARC of this book from The Next Step Pr via Netgalley for my honest review. The opinions in this post are 100% of Busy Bumble Bee Book Reviews and may differ from others.