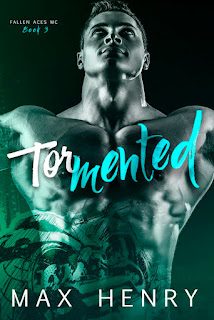 She’s perfect.
And broken, like you …
Unaware of how beautiful she is.
And how much worse her life could be …
She’s cast out for being different, misunderstood, or simply too complicated to bother with.
Just. Like. You …
She’s still perfect.
Because after all, you can’t break what’s already broken, and you can’t hurt what already suffers.
Or can you …?

I have to say that from the beginning of reading Mrs. Henry's books I have been hoping that Sawyer would get his own book. That he would get his own kind of happily ever after. Especially after the way Devil May Care ended, I was hoping by some miraculous luck that Dana had survived. And that we would get another Dana and Sawyer would get their HEA. Unfortunately that isn't the case. Tormented is the third book in the Fallen Aces series and we get Sawyer and Abbey.

I have to admit I kind of have mixed feelings about this book. I guess I just never imagined Sawyer and Abbey together.

I will say this I have loved Sawyer from the beginning. Ever since the Butcher Boy's series, when everyone else didn't seem to like him. And especially after Devil May Care. There was something pulled me to him. That even though he had a devil in his that made him do crazy things. That there was a completely different side to him.

Oh Abbey.... I have to say I just couldn't get into Abbey in this book. Now we have seen her a few times throughout the Butcher Boy's series and than this Fallen Angel Series. If you don't know who Abbey is, well she's the young girl that Apex (the former Fallen Angels president) rescued. She kind of irritated me at the beginning of the book and I found her to be a bit rude at the same time. Loom I get the girl had her own demons she was battling.

Overall even though I couldn't really get into Abbey. Or get into Abbey and Sawyer. I did really enjoy this book. It's dark and twisty.