Caught Up In You (Book Review) 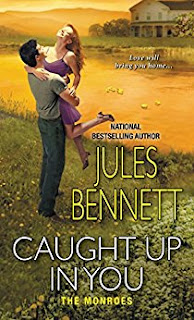 The Monroe brothers have their differences, but one project unites them: turning an antebellum mansion in their Haven, Georgia, hometown into a peaceful spa. It was the dream of their late sister—and it’s about to set off a major renovation in the life of middle brother Braxton. . .Braxton Monroe’s taking a break from teaching to do some strenuous work on a Civil War–era house, and feeling the strain in every rock-hard muscle. Good thing he has to interview massage therapists for the spa—even if it’s embarrassing to meet a job candidate in his boxers. Cora Buchanan has hands so talented—and a voice so sultry—he wants to hire her before he even lifts his head from the table. But he’s shocked to meet her outside the massage room—with her seeing-eye dog, Heidi the yellow lab.Cora has left her family—and fiancé—in Atlanta to make her way in this small town. All her parents’ money can’t restore her sight, but it’s up to her to restore her independence. Though she bristles at Braxton’s protectiveness, she too feels lingering effects from their intimate touch. Now that he’s her boss, it’s strictly hands-off. . . .Until a secret she’s keeping destroys his fragile trust, and they must find the courage to knock down the walls between them.

I have to admit that this is the first book in this series I have read. I actually missed out on a chance for Wrapped Up In You and just haven't gotten the chance to read it yet. So when  I came into this book  I had no clue what  I was going into.

Now if  you haven't gotten the chance to dive into this series yet let me give  you a run down. The Monroe's are brothers, but not by blood. They have all come from backgrounds that aren't so pleasant. But luckily found themselves with some loving people. Now the brothers are finding them taking on the task of opening the spa their younger sister wanted to open when she was alive.

I loved Braxton. He's the middle boy and the self proclaimed piece keeper. Who finds himself taking time off as a teacher to help out with this spa project. I thought Braxton was such a sweetheart, so sweet and caring. Who also had a funny side to him.

Gosh I just fell in love with Cora right off the bat. Even before I realized she was blind. I found her to be strong, brave, independent and full of life.

I really enjoyed this book and can't wait for Liam's book.