Face-Off At The Altar {Book Review} 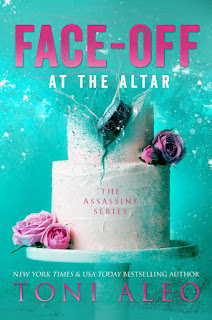 Markus Reeves is sucking. Big-time. Toiling away on a minor-league hockey team hundreds of miles away from home, he's watching his dreams of an NHL career fade away. Add in the lingering guilt he has over the dramatic demise of his relationship with college girlfriend, Mekena, and he's a mess on and off the ice.

But the family of his heart, the Sinclairs, won't let Markus suffer any longer. When he arrives himself back in Nashville for a trial run on the Assassins, it feels like his life may be making a turn for the better. If only he could get Mekena to forgive him...

Mekena Preston has been hurting since fleeing Nashville following the horror of Markus's betrayal with her sister. Now a professional photographer, Mekena finds herself in the same place at the same time with Markus to celebrate Lucy and Benji Paxton's wedding. Neither of them has been able to move on—and they're starting to wonder if they really want to.

They're headed for a face-off at the altar unless they can confront their past and unearth the truth about what really happened on that fateful night.

So I have to say I was actually going to take my time with this book and read it slowly. Unfortunately as soon as I picked it up and started reading it I couldn't put it down. I have been a huge fan of Mrs. Aleo's from the very beginning even before she published the first Assassins book. From way back when she first started writing this series on a free site. Even though this is book nine in the Assassins series it can be read as a stand alone. Its also a nice mixture of the Bellevue Bullies and the Assassins.

I have to say that I loved Markus and Makena in this book. I think that Mrs. Aleo wrote some real life issues that most people would avoid in books and wrote them tastefully. I also think that made Markus and Malena more likeable and relateable.

I loved Markus in this book. Markus is a former Bellevue Bullie and teammate of the Sinclair brothers. Markus is having a tough time on a minor league team and knows he can do better. He's also still dealing with the breakup from Makena. Now being called up to the Assassins and being in Nashville for Lucy and Benji's wedding, Markus has the chance to tell Makena the chance. I thought that Markus was such a sweetheart.

I really loved Makena in this book also. I thought she was sweet, caring, and a bit stubborn. She's still dealing with the aftermath of her's and Markus' breakup also. Shes also dealing with the betrayal from her sister and hasn't seen her family in over a year. Makena definitely stuck to her guns and what she thought was the truth.

As I said above I really enjoyed this book from start to finish. I couldn't put it down. I loved seeing all of the other characters from this series. It made me laugh, and get teary eyed, and even made swoon.

I'm giving this book 4 Stars out of 5

Disclaimer: I received an ARC of this book from the Ardent Prose Promotions for my honest review. The opinions in this post are 100% of Busy Bumble Bee Book Reviews and may differ from others.


Posted by Busy Bumble Bee Book Reviews at 8:21 AM