On The Line (Book Review) 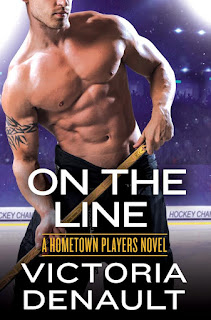 Book Description:
He had total control of his game--until she changed all the rules . . .As one of the best players in the NHL and the "golden boy" of the league, Avery Westwood knows he has to keep his cool--on and off the ice. His whole life is a carefully constructed image of perfection for the media and his brand sponsors. Of course, that means he can never let his true feelings show. But when it comes to the sexy sister of his former teammate, Avery might be willing to make an exception . . . even if it means breaking all his own rules.As far as Stephanie Deveau is concerned, having a thing for Avery is the equivalent of psychological napalm. Très bad idea. Then he moves in next door, all sexy smiles and a deliciously hot body that she can't resist. Something's happening between them--it's intense, a little (a lot) out of control, and real. Only Avery doesn't know everything about Stephanie's past. And the one exception to his rule might just be the one girl who could destroy his career.

As a first time reader of this series I did really enjoy it. Though there were a few times I became frustrated with the books, because it became repetitive through some of the chapters.

I liked both of Avery and Stephanie's characters. I thought that they were both strong and independent. Though Avery seemed to be stuck under his father's finger most of the time. You could definitely tell that there was a softer, sweeter and deeper side to him. I also thought at time that Stephanie was a bit too hard on herself for her past.

As I said above I did find that this book was an enjoyable read. I thought it was a light hearted and fun read.

Disclaimer: I received an ARC of this book from Social Butterfly PR via Netgalley for my honest review. The opinions in this post are 100% of Busy Bumble Bee Book Reviews and may differ from others.


Posted by Busy Bumble Bee Book Reviews at 9:30 AM